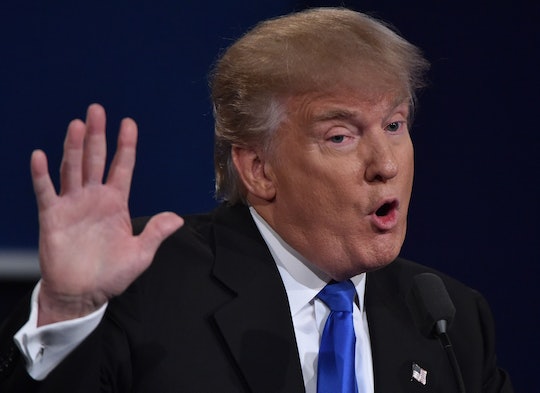 During the first presidential debate, Republican presidential nominee Donald Trump may have made a mistake when it came to word choice. As soon as he accused Democratic candidate Hillary Clinton of not having "the stamina" to be president, he welcomed a barrage of jokes and outraged reactions from, well, the entire internet. Luckily for those with more productive hobbies than me, I've sifted through the entire Twittersphere and compiled the best Trump "stamina" jokes out there.

Trump's stamina comment came after moderator Lester Holt grilled Trump on a comment he'd made during an interview earlier this month, in which Trump said, "Well, I just don’t think [Clinton] has a presidential look, and you need a presidential look."

In a bid to explain that comment during the debate, Trump said, "I don't believe Hillary has the stamina. To be president of this country, you need tremendous stamina. You have to be able to negotiate."

Cue the immediate — and massive — outpouring of reactions from debate watchers around the world, who took the opportunity to make fun of Trump's debate performance, make Viagra jokes, and point out the not-so-subtle sexism behind that sentence. Because the internet is a beautiful place, there were hundreds of responses to Trump's stamina statement by the time the debate wrapped on Sunday night.

The best answer of all, however, may have been delivered in person, at the debate. As soon as Trump accused Clinton of lacking stamina, she responded:

As soon as he travels to 112 countries and negotiates a peace deal, a cease fire, a release of dissidents, an opening of new opportunities in nations around the world, or even spends 11 hours testifying in front of a congressional committee, he can talk to me about stamina.

I mean, damn, girl. That's the kind of comeback most people can only think of 24 hours after someone's insulted them. Also, props to Clinton for turning one of her biggest scandals — i.e., her private server fiasco — into a joke. It was a risky move, but it brought her cheers from the crowd.

Judging by the apparent joy both Clinton and the internet got out of firing back at Trump's first insult, I have a feeling it'd be OK.