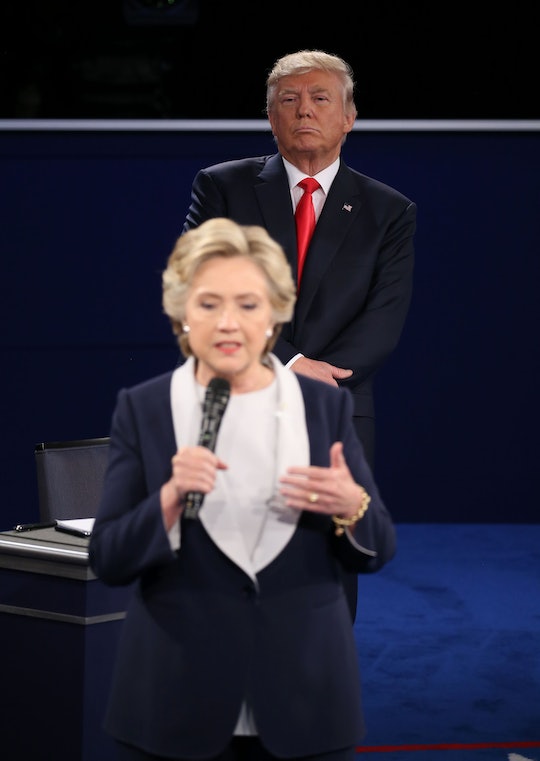 During the second presidential debate, viewers noticed something a little odd: Republican candidate Donald Trump would not stop standing over Democratic nominee Hillary Clinton. Some though it was threatening, others thought it was powerful, and everybody, apparently, thought they would make some good memes of Donald Trump standing over Hillary Clinton. Because the best way to get through an awkward, uncomfortable debate, of course, is to laugh your way through it.

As Clinton moved around the stage and worked the room, Trump seemingly stood behind her and glowered, a move that earned him plenty of criticism on Twitter. "A couple of times I've actually feared for Hillary's physical safety based on Trump's expression while standing behind her," wrote Twitter user Rebecca Carroll, while user Elli Daniels tweeted, "Donald Trump standing behind Hillary like some kind of racist pumpkin squash version of slenderman."

Many people on Twitter seemed concerned about what they called Trump's "menacing" behavior, with some calling it "subtly threatening," and "a little too revealing." However, despite their discomfort — this is the internet, after all — people rallied, harnessing the opportunity to create some prime memes of Trump standing over Clinton.

While the memes were hilarious, they were also making the best out of an awkward situation. As Twitter user Katie McVay put it, "I want them behind podiums so Trump isn't following Hillary Clinton around like some sort of man who I avoid in the subway." Many women — and a good deal of men — found Trump's hovering a bit, well, intimidating and invasive. Several Trump supporters weighed in online as well, saying that Clinton was clearly "sick" and "might have another fainting spell soon."

So apparently not everyone was imagining the two candidates' odd standing dynamic as a Simon and Garfunkel album cover or as a trailer for the next scary movie. Either way, Clinton continued to answer questions and either didn't notice Trump following her around the stage or pretended not to. Eventually, Trump stopped standing closely behind Clinton, but the damage was already done: the memes were already out there.

Regardless of whether you thought Trump standing behind Clinton was creepy or not, you have to admit that the memes it created gave Twitter something to laugh about during an otherwise at-times-painful debate. And who knows? Maybe we'll see a Scary Movie meets House of Cards hybrid sometime soon. The scene we saw on stage tonight would be a great fit.