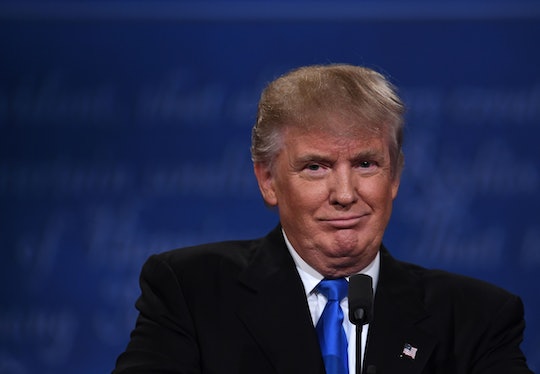 During the first presidential debate of the general election season, Donald Trump unintentionally drew a few laughs by claiming he has a better temperament than opponent Hillary Clinton. Within minutes, the Donald Trump "temperament" memes and reactions were popping up online.

As for what the experts have said in the past about Trump's temperament, the news has been largely critical of the Republican nominee. As psychologist Dan P. McAdams said for The Atlantic in June:

Across his lifetime, Donald Trump has exhibited a trait profile that you would not expect of a U.S. president: sky-high extroversion combined with off-the-chart low agreeableness ... Trump plays his role in an outgoing, exuberant, and socially dominant manner. He is a dynamo—driven, restless, unable to keep still.

In Trump's eyes, though, that analysis seems to be positive, especially when it comes to what it says about his ability to serve as president of the United States.

Meanwhile, some people watching at home seemed to disagree.

Even the objective record seemed to reflect how the majority of the electorate feels.

That's not even a criticism of Trump. As many surveys have shown, his supporters appreciate that Trump isn't traditionally "presidential" in his demeanor. As he even admitted to people at a rally during a meeting April, "They say, ‘Oh, you should be more presidential.’ Listen, I’ve got to be careful not to be too presidential, folks.'"

This also isn't the first time Trump's been faced with direct questions about his temperament. Just last week, Bill O'Reilly actually laughed at Trump when the candidate was appearing on the Fox News show when the subject came up and Trump said, "My strongest thing is my temperament, and they talk about my temperament. They put 10 things on the board, and then they say, ‘Oh, let’s go after temperament.’ It is my strongest thing, according to the people that know me best. I won’t even say it myself."

Catching that he said himself what he said he wouldn't say himself, O'Reilly noted, "You just did say yourself, though — just to point out."

At least during the debate, Trump wasn't so bashful about claiming how great his temperament is.