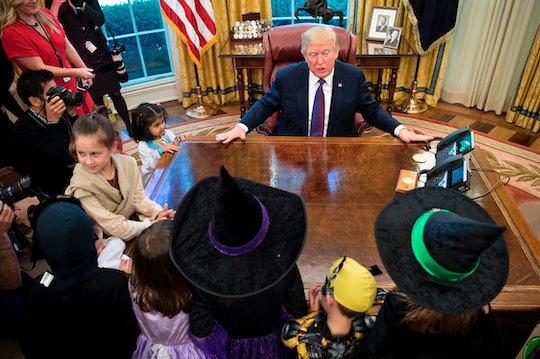 Donald Trump Told A Kid They Had No “Weight Problems" During Trick-Or-Treating, & I Wish I Was Kidding

President Donald Trump is known for speaking his mind, even around impressionable young children who shouldn't have to be subjected to his comments. While his jokes might be OK around people who are used to being the punchline of his jokes, his behavior shouldn't be accepted anywhere or towards anyone else. Case in point — on Friday, Donald Trump told a kid they had no "weight problems" during trick-or-treating and it wasn't very cool of him.

The president made some pretty out of line comments to the trick-or-treaters, according to a transcript posted by NBC Capitol Hill reporter Leigh Ann Caldwell on Twitter. The president stated that he couldn't believe members of the media "produced such beautiful children" and told one child that he is going to be in Japan in two weeks after asking if she was Japanese. But perhaps his worst one was made towards one kid who he handed out candy to. "You have no weight problems," Trump said, according to the transcript. "That's the good news, right?"

Trump's comments are akin to your slightly senile Uncle Billy's Thanksgiving diatribes, where he asks you about your relationship status or comments on your weight. You shrug those comments off because it's your uncle and you only see him twice a year, anyway. But unlike the president, your Uncle Billy is not responsible for running the country. And this comment, about a kid's weight, is definitely not something that should be coming from the president. Not only is it inappropriate, it's a little insulting to the kid's parents, too.

People on Twitter were not too happy about the president's remarks, either.

Children are already so impressionable. The last thing they need to hear is someone insulting their parents or making comments about their appearance. Self esteem is developed through positive words of affirmation, but not like the words that the president used. Those were uncalled for, especially since the remarks about weight were reportedly made towards a little girl, according to Vogue.

In addition, it has been proven that kids are actually listening to the hurtful things that the president has made over the past few years. A story from Buzzfeed, published in June, found that kids all across the nation were using the president's words to taunt other students. Needless to say, his words to everyone matter.

In just one appearance, the president demonstrated how not to hand out candy or talk to trick-or-treaters when Halloween finally rolls around this Tuesday. If you're stuck at home passing out candy, you should probably tell the trick-or-treaters how much you love their costumes, and leave it at that. Oh, and pass out good candy, too. Trump's choice of handing out bags of Hershey's kisses to the trick-or-treaters on Friday was a pretty solid choice.

People who voted for Trump do admire his outspoken tendencies — but this is one instance where the president should have kept quiet.