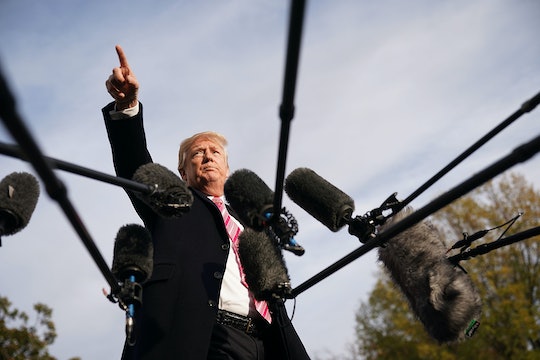 Trump Thinks He Was *Probably* TIME’s Person Of The Year Pick, Twitter Disagrees

If there's one thing that just about everyone in America can agree on, no matter where they fall on the political spectrum, it's that the president's Twitter feed is a constant source of entertainment, or concern. So when Donald Trump tweeted about probably being TIME's Person of the Year, the responses were appropriately hilarious. Of course, when you're the President of the United States, it's likely that no matter what you say, people are going to criticize you. But Trump's tweets have taken on lives of their own since his inauguration. Well, actually, Trump's tweets have always been pretty infamous, but his latest social media update has pretty much everyone talking.

As the world remembers, Trump was named TIME's 2016 Person of the Year, after his electoral college win for the presidency. It was a controversial decision from the magazine, which described their decision as having to do with that controversy surrounding the then president-elect. "This is the 90th time we have named the person who had the greatest influence, for better or worse, on the events of the year," the magazine stated. "So which is it this year: Better or worse? The challenge for Donald Trump is how profoundly the country disagrees about the answer."

Then, the day after Thanksgiving 2017, Trump took to Twitter to explain, basically, that he "took a pass" for the honor this year, after claiming that he was "probably going to be named" Person of the Year. Of course, jokes soon ensued. Many decided to take the opportunity to express their disbelief that Trump would actually be Person of the Year for the second year in a row, and accused the president of lying about it.

Trump's tweet also contradicts earlier reports that the president was being beat out for the title by both Taylor Swift and Carmen Yulín Cruz, the mayor of San Juan, Puerto Rico in a reader's poll.

What's more, this tweet wouldn't be the first time Trump has allegedly embellished the truth about his status regarding TIME magazine. In June, The Washington Post reported that a framed TIME cover featuring Trump that was hanging up in several of his clubs was fake.

According to The Washington Post, "The Time cover is a fake." And it's not just that, there was a lot of effort that went into making the cover appear real. But, that simply isn't true:

In fact, the cover on display at Trump’s clubs, observed recently by a reporter visiting one of the properties, contains several small but telling mistakes.

So really, if Trump's tweet does turn out to be a lie, it wouldn't be too surprising. And considering the fact that two former TIME employees have disputed Trump's claim at "probably" being selected, it seems as though the president might have stretched the truth a bit.

Richard Stengel, the former editor of TIME and James Poniewozik, a former columnist for the magazine both chimed in on Twitter to put the president in his place. Together, they made the point that even if the magazine did reach out to Trump requesting a photoshoot, that doesn't necessarily mean that he was "probably" going to win the title again. In fact, as Poniewozik points out, it would be extremely odd for the magazine to pick the same person twice in a row.

And later Friday evening, TIME magazine itself took the time to call out Trump's tweet for being inaccurate.

Really, though, Trump's claim that he "probably" was going to be awarded the title for Person of the Year serves as, if nothing else, a reminder that he is somewhat obsessed with winning. And that's not always a good thing.