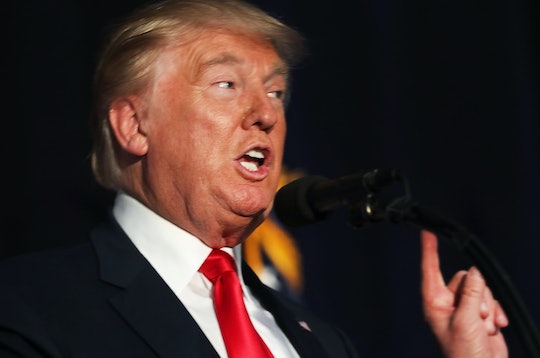 Donald Trump doesn't have the best record with women, but this is low — even for him. In a short Twitter rant Friday morning, Trump called former Miss Universe Alicia Machado "disgusting" and encouraged followers to see her "sex tape," according to Salon.

The Trump campaign has not responded to Romper's request for comment.

The GOP nominee's comments come after Hillary Clinton's campaign released an ad in which Machado appears, detailing the mistreatment she suffered at the hands of Trump and his company after being crowned Miss Universe in 1996. In the video, Machado said Trump refused to pay her what she was owed for commercials, called reporters on her to watch her work out, and consistently shamed her for gaining weight after the pageant. She's also not the only Miss Universe contestant that Trump has bullied and shamed, according to Inside Edition.

But Trump continued to fat-shame Machado after Monday's debate, during which Clinton mentioned Machado as an example of Trump's poor record on women. And as if that weren't enough, Trump added a sizable dose of slut-shaming to his comments on the former Miss Universe.

The tweet illustrates further that Trump thinks of women solely as sexual objects. Women are allowed to be — and praised for being — sexy and topless in magazines, as long as they are involved with Trump (see: Melania Trump). But they're "disgusting" if they're sexy and topless in magazines, but not involved with Trump, like Machado. They're also disgusting if they gain weight, because that's "unattractive," and attractiveness, of course, is the sole determinator of a woman's worth in Trump's eyes.

When asked about these allegations and her past by CNN's Anderson Cooper, Machado said this:

[Trump] can say whatever he wants to say, I don’t care. You know, I have my past. Of course, everybody has a past. I’m not a saint girl. But that is not the point now.

Trump and Trump's surrogates' attempts at smearing and shaming Machado follow a known pattern of bullying and intimidating political foes and women.

Machado talks about Trump's intimidation and bullying in Clinton's new ad, saying she felt incredibly humiliated when Trump commented on her weight and even developed an eating disorder later in life because of it. "I wouldn't eat, and would still see myself as fat, because a powerful man had said so," she said.

It seems the intimidation hasn't stopped since then, and instead has just worsened as Trump and his supporters pile on the slut-shaming, fat-shaming, and criminal allegations in an attempt to undermine her support for Clinton.