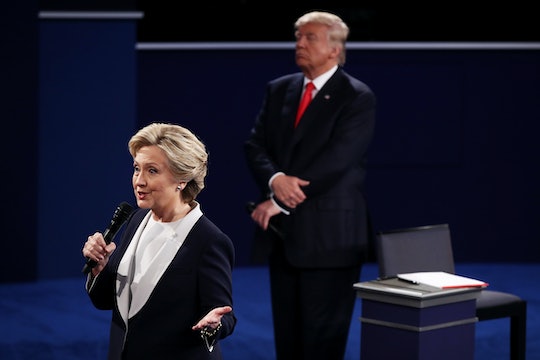 Tensions were high and the discomfort palpable during the second presidential debate Sunday night at Washington University in St. Louis, MO. However, it wasn't the discussion of Trump's leaked Access Hollywood audio, describing sexual assault, or the millionth time Trump brought up Hillary's emails, that caused the most awkward moments in during the debate. Donald Trump won't sit down during the second presidential debate, a nd it's creepy as hell. There are chairs for a reason, Donald, and after the last three days your campaign has attempted to endure, we can only imagine — collectively — that you need to take a break, take a breather, and sit the hell down.

The most awkward moment happened when the Democratic presidential nominee, Hillary Clinton, answered a question about Obamacare. An audience member evoked high premiums and the increase in health care costs, asking Clinton what she would do to change and/or better the national health care plan current President Barack Obama passed on March 21, 2010. To answer the audience member's question, Clinton walked toward the group said member was sitting in. That meant Clinton had to walk across the stage and pass Trump in order to talk to the individual who asked the question face-to-face. Instead of sitting down, Trump stood behind Clinton in what can only be described as a creepy I Know What You Did Last Summer moment that sends shivers down any '90s horror movie fan ever (and any woman who has had a man stand too close to her in an attempt to intimidate her).

Trump's refusal to sit wasn't lost on viewers, who took to Twitter to voice their observations, their concerns, and just how freakin' creepy it is that the GOP candidate wants to stand behind someone else while they speak. Here are just a few of the many tweets. Of course, read at your own risk:

Of course, there were also the sexist takes on why Hillary was sitting and, you know, using the chair provided for her, while Trump refused to sit as if pacing back and forth is a normal, effective way of showing the American public that you're not at all uncomfortable or worried.

I guess, even though viewers are all watching the same debate, viewers also want to see what fits their narrative, their believe,s and their political views. In the end, you have to wonder: if the two sides of the political spectrum can't agree that it's a little creepy for a man to stand so close to a woman (and behind her) while she's speaking, are the debates really helping would-be voters make up their minds before Nov 8? We can only hope.