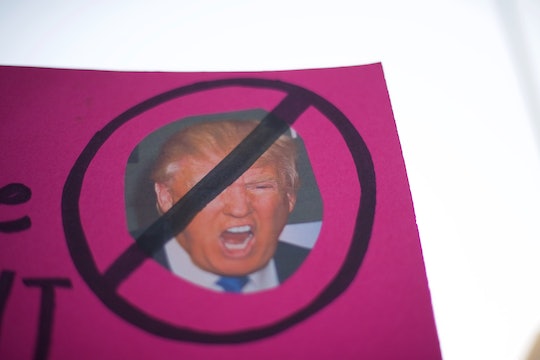 Donald Trump's Abortion Comments On '60 Minutes' Were Hypocritical At Best

In his Sunday interview with CBS' 60 Minutes, Donald Trump's abortion comments stole the show — and for reasons Trump likely didn't foresee. While speaking to Lesley Stahl during the pre-taped segment, the newly-minted president-elect noted that women nationwide ought travel across state lines to obtain abortion procedures — something that the historic Roe v. Wade ruling expressly forbids. Stranger still, Trump earlier seemed to allude to the fact that there was nothing he could do about the June 2015 Supreme Court same-sex marriage ruling because the court had already handed down its official decision.

Referencing his promise to appoint only conservative justices to the high court, Trump suggested that the court might overturn Roe v. Wade. "The judges will be pro-life," he said.

"Yeah, but then some women won't be able to get an abortion," Stahl replied.

"Yeah, well, they'll perhaps have to go — they'll have to go to another state," Trump deflected. When Stahl questioned whether forcing women to cross state lines to obtain and abortion was "OK," Trump responded, brushing off Stahl's obvious concern. "Well, we'll see what happens — it's got a long way to go, just so you understand," he said. "That has a long, long way to go."

Contrary to Trump's opinion, the Supreme Court is veritably stubborn on the issue of protecting women's personal privacy. However, Trump seemed not to worry about the waves his 60 Minutes comments might cause, giving in to his conservative supporters' pleas for a repeal.

While Roe v. Wade does protect a woman's right to obtain an abortion (the court argued that the 14th Amendment "protects against state action the right to privacy, including a woman's qualified right to terminate her pregnancy"), many anti-abortion, pro-life advocates have lobbied to make access to those procedures difficult through hospital-admittance mandates, waiting periods, and similarly restrictive bylaws such as requiring women to receive trans-vaginal ultrasounds ahead of their procedure, or mandating that they hear a fetal heartbeat. Forcing women now to cross state lines is further restrictive, as it bars many low-income and minority women from accessing abortions.

Justice Harry Blackmun himself noted as such in his original opinion, paraphrasing,

[Petitioner Jane] Roe alleged that she was unmarried and pregnant; that she wished to terminate her pregnancy by an abortion "performed by a competent, licensed physician, under safe, clinical conditions"; that she was unable to get a "legal" abortion in Texas because her life did not appear to be threatened by the continuation of her pregnancy; and that she could not afford to travel to another jurisdiction in order to secure a legal abortion under safe conditions. She claimed that the Texas statutes were unconstitutionally vague and that they abridged her right of personal privacy, protected by the First, Fourth, Fifth, Ninth, and Fourteenth Amendments.

... A state criminal abortion statute of the current Texas type, that excepts from criminality only a lifesaving procedure on behalf of the mother, without regard to pregnancy stage and without recognition of the other interests involved, is violative of the Due Process Clause of the Fourteenth Amendment.

Despite this, on Sunday night, President-elect Trump took it upon himself to deny that Roe v. Wade was absolute in its protective rights, flummoxing those who had witnessed him elsewhere seem to honor the Supreme Court's decision in his same-sex marriage comments. "It’s law," Trump said, referring to the landmark Obergefell v. Hodges. "It was settled in the Supreme Court. I mean it’s done. These cases have gone to the Supreme Court. They’ve been settled. And I’m – I’m fine with that."

Whether or not Trump will apply his surprisingly logical "Supreme Court bests all" stance to other controversial topics going forward is yet to be seen.