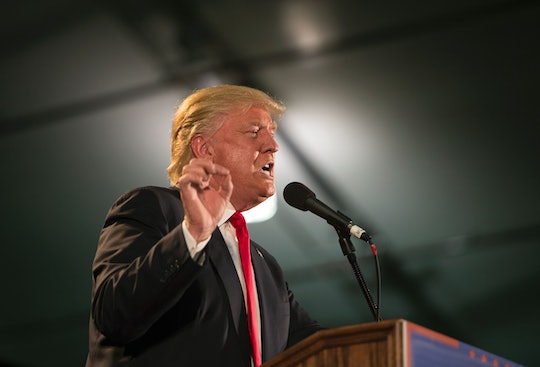 Donald Trump's 'African-American' Isn't Technically A Supporter — But It's Complicated

Just when you thought that this election cycle couldn't get any more terrible, presumptive Republican nominee Donald Trump pointed at a black man at a rally last week in Los Angeles, and said, "Look at my African American over here!" Yup, that happened. And everyone from sea to shining sea should hang their heads in shame. One bright spot in this story? Donald Trump's "African American supporter" isn't technically a supporter. Gregory Cheadle, who is a California congressional candidate this year, told NPR that he went to the rally to see and hear for himself what the candidate had to say.

In fact, he might be the most open minded human being to be interviewed at a Trump rally ever. "I was not offended by it because he had been speaking positively about black people prior to that statement," Cheadle said. He added that others in the crowd were "laughing" that the real estate mogul noticed him. "It was a jovial thing," Cheadle said.

Trump was speaking about a previous event in Arizona where an actual black supporter was arrested at a rally for punching a protestor. Trump then spotted Cheadle and said, again because it bears repeating, "Oh look at my African-American over here. Aren't you the greatest? Do you know what I’m talking about?”

Mr. Cheadle might not have been offended and I guess I can see his point. I'm a white woman living in a not quite gentrified area of Brooklyn, New York. When I hear the Puerto Rican bodega owner call me the "white girl" in Spanish to his friends at the counter, I get it. I stick out. "Look at the white girl, buying ice cream again. Cada día." I laugh and self deprecate in return. If Cheadle was being merely singled out, I would get his forgiveness.

Still — even though he's not a supporter of Trump's, Cheadle does seem to be OK with the candidate's, very flawed messages about race. And that actually creates an entirely new problem of its own.

If Cheadle can take Trump's casual racism and verbal pat on the head (aren't you the greatest?) in good fun or for some political gain, so be it. People vote against their interests all the time. I'm not here to judge.

But what's particularly gross about Trump's comment at the rally, even if Cheadle was able to laugh it off for whatever reason, is that Trump is running a campaign steeped in bigotry, misogyny, and worst of all, violence.

Trump wasn't being kind or funny — he was using the color of someone's skin to prove he was a "nice guy." If this is how he treats regular Americans, and fellow American politicians, can you imagine Trump at a state dinner with leaders of foreign countries? (Granted, the Angela Merkel-Trump memes would be funny, if diplomacy weren't so important.)

When he pointed at Cheadle, even if Cheadle "didn't mind," Trump was explaining and brushing off an incident at a rally in Arizona this spring where protestors, not perfectly, came dressed in KKK robes and a Trump supporter was arrested for punching one of them. This is not the first time (and I'd bet my nightly bodega ice cream that it won't be the last) that violence and degrading behavior has occurred at a Trump gathering. For Trump to point to the one black man in the crowd last week and pretend that that means it's OK that he hasn't disavowed racist and nationalist groups throughout this election cycle is just one more lie Trump supporters (and even Cheadle, an "unbiased" spectator it seems) are eating up.

It's one thing for the odd man out to have to laugh about being the odd man out. It's another, it seems to me, to allow Trump to act this way in public and pretend that he is a serious candidate for president. It's even more worrisome that a man like Cheadle doesn't really seem to mind.