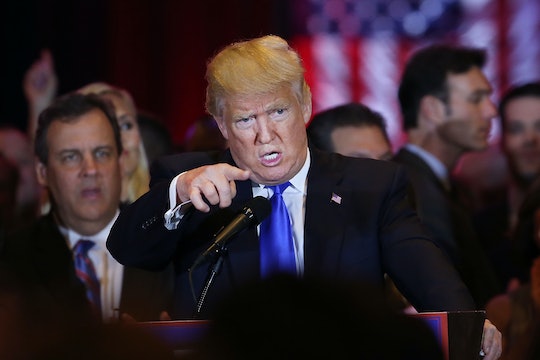 Donald Trump's Campaign Against The Media Is Problematic For This Reason

If you've been following Donald Trump's surprising rise as the presumptive Republican nominee, you may have noticed a trend: Trump doesn't like the media very much. That's all fine and good, and hey, it's rather understandable. After all, the media often points out unfavorable things about the hotel mogul, which don't necessarily paint him in the best light. But as he gets closer to the presidency, the public needs to take a closer look at his interactions with the field, since Donald Trump's campaign against the media is problematic at best and downright dangerous at worst.

The thing is, free press is a vital cornerstone of a true democracy, and like it or not, reporters are not there to function as a person's PR campaign — nor should they be. Someone pursuing one of the world's most powerful positions should be scrutinized and criticized, and they should be grateful that they live in a society where opinions and curiosity are alive and well. But that's not the stance Trump has taken.

Instead, he has referred to "disgusting reporters" and allegedly blacklisted certain reporters from campaign events. Trump's campaign manager, Corey Lewandowski, told Buzzfeed recently that he didn't ban reporters from events — but according to Mother Jones, reporters' media credential requests have often been turned down after their respective publications have published negative content on Trump. (The list of publications whose reporters have previously been denied media access includes Mother Jones, Buzzfeed, and The National Review, among others.)

If he made it to the White House, it's unlikely that Trump's stance on the media would change, and while he couldn't make it illegal to criticize the president, he could still damage freedom of the press. "There are three ways in which a president can be punitive to members of the press that he does not favor: not invite them to press conferences, exclude them from access to other forms of information, and exercise the authority to prosecute them, hopefully when there’s a legitimate basis to prosecute," law professor and author Geoffrey Stone told Slate in March. He explained:

The real question is: What is the vulnerability of the press to a president who is not respectful of the appropriate role the press plays, who treats them with disdain and regards them as a dangerous enemy, not only to himself but to the nation? There’s a large amount of information that the media get from the president that is then passed on to the American public, and that’s valuable, and a president has the authority to say, no, I’m not going to talk to you anymore. The “you” can be the entire press corps or it can be selected members of the press, and the problem of the use of that authority is that it then manipulates the press into currying favor with the president.

Freedom of the press is a vital part of democracy, and Trump shows a dangerous lack of respect for the media when they present views he opposes. Trying to manipulate the media is a slippery slope that hurts democracy and discourages a free-thinking society. It sounds dramatic, but we should be talking about it, because Trump has already taken a few steps down that path.

You know that whole "if you have nothing nice to say, say nothing at all" ideology? It makes great advice for children — but it really doesn't fly as instructions to the press from a potential president. If he really does want to "make America great again," Trump would be wise to reconsider how he interacts with the media.