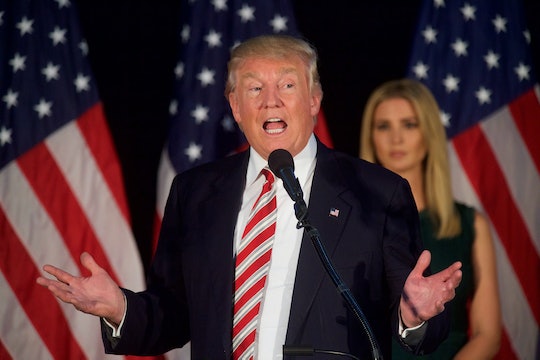 Donald Trump's Child Care Plan Sounds Fine, But It Has One Glaring Flaw

As part of his ongoing efforts to prove, despite vast quantities of evidence to the contrary, that he not a sexist jerk who thinks of women as fat pigs, dogs, and bimbos, Republican presidential nominee Donald Trump has unveiled a new child care plan that he will supposedly enact if he is elected president. The plan actually does look like a step in the right direction, but it has a glaring flaw that reinforces Trump's sexist worldview—it omits fathers.

While giving a speech in Philadelphia on Tuesday evening, Trump revealed his proposal to make child care more affordable for Americans. His daughter Ivanka, a huge proponent of working women who spoke about the need for equal pay and more supportive policies for mothers at the Republican National Convention in July, stood behind her father as he spoke Tuesday night. And a lot about the plan is very good, or at least better than what the United States has now. Trump proposed guaranteeing six weeks of paid maternity leave for women whose jobs do not already provide it for them. He also proposed making child care tax deductible for couples earning under $500,000 each year, or individuals making less than $250,000. Sounds pretty decent, right?

But here's the flaw in the whole "more enlightened Trump" plan: his proposed six weeks of leave is only available for mothers, and not transferable to fathers.

After all, Trump never wanted to take care of his babies in that way, so why would any other men? When talking about having children with his wife Melania in a 2005 Howard Stern interview, Trump said, "I mean, I won’t do anything to take care of them. I’ll supply funds and she’ll take care of the kids. It’s not like I’m gonna be walking the kids down Central Park." (Heaven forbid a man take his children to a beautiful park! That sounds miserable!)

And when asked on The Anthony and Opie Show that same year about changing diapers, Trump said, "No, I don’t do that," continuing, "There’s a lot of women out there that demand that the husband act like the wife."

It's the same kind of attitude as dads who say they're "babysitting" when they take care of their children, and it makes me feel such flames on the side of my face.

Plenty of fathers do want to play a more active role in their children's lives, and this child care plan's refusal to make leave transferable is a big old middle finger in their faces (and those of women who would really like their male partners to share the parenting responsibilities).