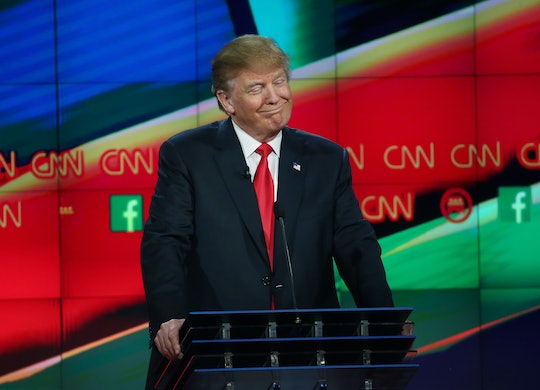 With his well-deserved reputation as the GOP’s outspoken firebrand, Republican presidential candidate Donald Trump's closing statement at the CNN GOP debate came as no big surprise. Up to this point, Trump hasn't exactly followed tried-and-true methods for obtaining the GOP nomination. He's mostly relied on pandering to the portion of Republican voters who are disillusioned with the federal government. And then there are his most criticized comments: Trump not only argued in favor of a huge wall separating Mexico from the United States, he then had the audacity to argue that the Mexican government should foot the bill for said wall. And his final words during CNN's GOP debate proved Trump continues to be unhappy with the current state of the world.

More recently, Trump argued that Muslims should be barred from entering the United States. This proposal is totally shocking, but in the context of Trump’s arguments leading up to this proposal, it’s actually disturbingly consistent: Trump had previously proposed that the United States create a database to track Muslims. Not surprisingly, Trump’s adversaries for the Republican nomination hope to use these extremist positions to steal supporters away from Trump. Florida Gov. Jeb Bush has called Trump “unhinged,” and Texas Sen. Ted Cruz clarified that banning Muslims is “not my policy.” Even New Jersey Gov. Chris Christie weighed in on the Muslim immigration issue, hoping to revive his floundering campaign. “This is the kind of thing that people say when they have no experience and don't know what they are talking about,” Christie said last week during a radio interview.

Here is the full transcript of The Donald's closing statements at the debate:

If I'm elected president, we will win again. We will win a lot. And we're gonna have a great, great country — greater than every before. Thank you.

Will viewers think Trump, who spent much of the debate arguing with his competitors, is going to fix the problems he claims the country has? Only time — and polls — will tell.