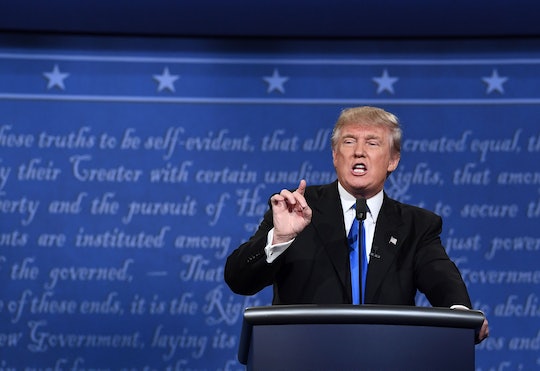 The debate held at Hofstra University on Monday night was the first time that the two candidates have ever gone head-to-head, and for almost two hours, voters got a taste of what the rest of the election cycle would look like. It's going to be quite the ride to the November election if Donald Trump's closing statement at the first presidential debate is any sign of what's to come. Leading up to the debate, Trump's campaign made the rounds to the press and on social media touting the fact that the Republican nominee wasn't going prepare very much for the event, even as rumors spread that Democratic nominee Hillary Clinton was studying up and practicing well into Monday afternoon. And his closing statement sort of showed that the candidate didn't do his homework.

It was anyone's guess as to what "type" of Donald Trump voters were going to get — the rowdy candidate they got a taste of during the GOP primary debates or the more restrained candidate who has been using a teleprompter more often since his nomination at the Republican National Convention this summer. It was a little bit of both. Trump spent the debate mainly repeating the policy points that he's been stumping on, attempting to fact check his opponent and her rebuttals, and defend himself against Clinton's jabs.

But the closing statement was all about the Trump many viewers and voters are used to seeing on TV. And of course, making America great.

Trump was cut off towards the end of the debate by moderator Lester Holt and asked to make a quick summary of his platform in closing. Instead of going into to too much detail, Trump resorted to talking about "making American great again," and repeated his campaign slogan a few times before having to sign off.

It wasn't an easy night for Trump, as he was blatantly interrupting his opponent throughout the evening and never got into too many specifics about his policies. Instead Trump seemed defensive, pointing his finger at Clinton and interjecting his thoughts while she spoke throughout the evening.

Many in the Clinton camp were worried going into the debate that the presidential hopefuls would be graded "on a curve," meaning that as long as Trump didn't totally lose his cool or say something derogatory to the candidate, it would be a win for the real estate mogul.

It's not the most perfect metaphor for judging presidential candidates, but Trump definitely lost his cool during the debate more than his opponent. His closing statement, which was, again, just more about how he wants to "make America great," didn't seem to give the candidate the "oomph" supporters might have been looking for.

Trump boasted earlier in the month about not spending too much time preparing and it showed in his closing remarks at the first presidential debate. Here's to a better try at the next debate in October.