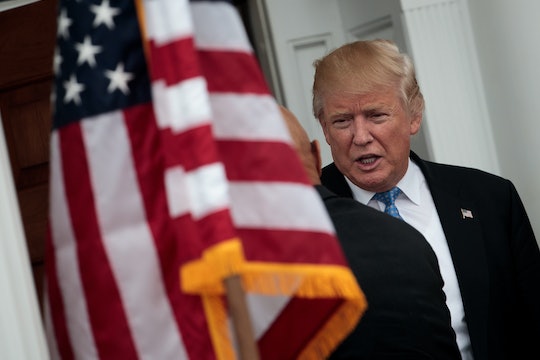 “You brought this on yourself,” my father used to tell me, as he stepped over my body while I tried to pick myself up off the kitchen floor. He always mumbled the sentiment, or something similar, after physically abusing my mother, my brother, and myself. If only we were more quiet. If only we didn’t argue. If only we didn’t tell him, “No.” If only.

Now that Donald Trump is president-elect, I fear I will be hearing much of the same for at least four years, if not longer. Trump's election is reigniting my Post Traumatic Stress Disorder (PTSD) and forcing me to relive an abusive childhood I actively spend time and energy trying to forget. What might be just another presidential election to most is for me a trip down memory lane through the door of my childhood home, where my father beat me for a better part of 18 years.

Like most domestic abuse victims, I initially shook off Trump and what I then described as his "antics." I made excuses for his outbursts — like his continued attacks on Rosie O'Donnell — by claiming they were nothing more than shameless ploys for attention. When he announced he would be running for president, I said, "He's not serious," and when he made it past the primaries I claimed, "He'll never be our president."

Just like those early years of what became a never-ending cycle of child abuse and domestic violence, I lied to myself in the hopes that utter disbelief could alter my reality. Phrases like, "He doesn't mean it," and, "It'll get better," came out of me effortlessly, because I had said them so many times. "My father didn't mean to hit me, he was just tired," I'd say to myself. "It won't always be this way," I'd tell myself, attempting to hide another bruise by perfectly positioning my hair to cover a specific part of my face.

As Trump's campaign gained in popularity, I could no longer dismiss his behavior, or hope he would go away, or assume that his campaign would come to a blistering, disastrous end. The triggers that have now re-ignited my PTSD, became more and more frequent. Just like my father promised me he loved me and hit me because he loved me, Trump promised the American public, "No one respects women more than I do," even after he was accused of sexually assaulting women and publicly bashed women for their looks, their weight, and even the fact that they menstruate. Just like it worked for my father, it worked for Trump.

Just like my father told me, "No one would believe you. You're worthless, and I'm the guy who goes to church every Sunday," when I threatened to tell my high school English teacher about the abuse, Trump suggested Natasha Stoyonoff wasn't "pretty enough" to be sexually assaulted, so no one would believe Stoyonoff when she alleged that Trump tried to forcibly kiss her during an interview in 2015.

When Trump claimed he'd "build a wall" separating the United States from Mexico and implement an immigrant registration program that would target Muslims entering the United States, he highlighted the benefit such xenophobic policies would have for the American people. When my father hit me and pulled my hair and choked me, he was quick to remind me that it was for my benefit. He abused me because he loved me, he said. He had to "teach me a lesson," because what kind of a human being would I become if I didn't learn to obey him? If I didn't constantly agree with him?

When Trump claimed he'd "build a wall" separating the United States from Mexico and implement an immigrant registration program that would target Muslims entering the United States, he highlighted the benefit such xenophobic policies would have for the American people. When my father hit me and pulled my hair and choked me, he was quick to remind me that it was for my benefit. He abused me because he loved me, he said.

When Trump became the Republican presidential nominee, I started to plead. Just like I begged my mother to leave my father, regardless of how difficult it would be or how scared she was, I begged Trump supporters to see just who, and what, they were voting for. And just as my mother had her reasons for staying — reasons that forced her to overlook financial, emotional, verbal and physical abuse — 47 percent of voters could overlook Trump's actions and words, and help him secure the necessary electoral votes to become the next president of the United States.

And now that Trump is the president-elect of the United States, I am left as confused and bewildered and hurt as I was then, when I realized my mother couldn't afford to leave my father. He made promises to her he couldn't keep, he blamed her for the pain he had caused, and he ensured her that if she were to change in a way that benefited him, and only him, things would get better.

I'm afraid this country has elected someone just like my father. And I'm afraid at the end of his term, Trump will do nothing more than say, "You brought this on yourself."

For my entire life and right up until the moment I met my partner and the father of our now 2-year-old son, I feared spending my life with someone like my father. I was terrified that the cycle of abuse I was lucky enough to escape from — one that my mother, eventually, survived, too — was one I was powerless to avoid. I worried that my future had already been written; formed by the cuts and bruises my father left me with. Now?

Now I'm afraid this country has elected someone just like my father. And I'm afraid at the end of his term, Trump will do nothing more than say, "You brought this on yourself."