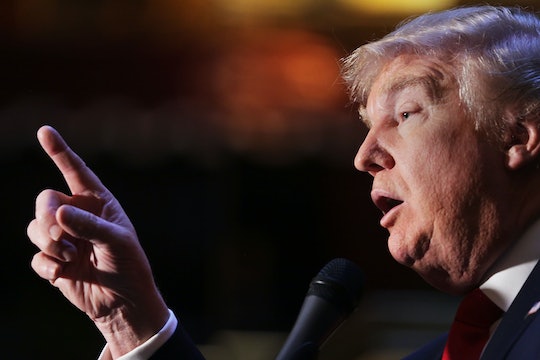 We new they were coming: Donald Trump's presidential campaign ads. But it is a bit surprising that for his first campaign ads, which premiered on Morning Joe, The Donald didn't go, well, huge. Instead, we're treated to just two radio spots, one that features Trump, and one that makes you realize how ridiculous Trump's words are when they're spoken by another person. And in this case, strangely for the far from woman-friendly candidate, it's a female voiceover.

The ads themselves don't necessarily say anything new — we know Trump wants to build a wall, wants to create jobs, and is better than every other candidate running or who has ever run. (Well, according to him, that is.)

But they still are no less ridiculous. The ads might not necessarily move the needle for the candidate — who continues to lead Ben Carson in the GOP polls, and is likely not going to stray from that position anytime soon, particularly on the heels of a much-anticipated (and protested) Saturday Night Live appearance — but they continue to outline his plans for how he intends to "make America great again." And manage to look like a SNL parody in themselves:

But, hey, as ridiculous as Trump's "don't mess with us" message sounds, "Don't Mess With Texas" is an actual presidential statement.

Watch the ads below:

More Like This
'Virgin River' Fans Can't Stop Cracking Jokes About How Charmaine Is *Still* Pregnant
What Parents Need To Know About Hulu's Predator Prequel Prey
10 Cozy, Romantic, & Drama-Filled Shows To Watch If You Love 'Virgin River'
Dad Removed From Flight After “Nervous” Toddler Wouldn't Sit In Own Seat For Takeoff