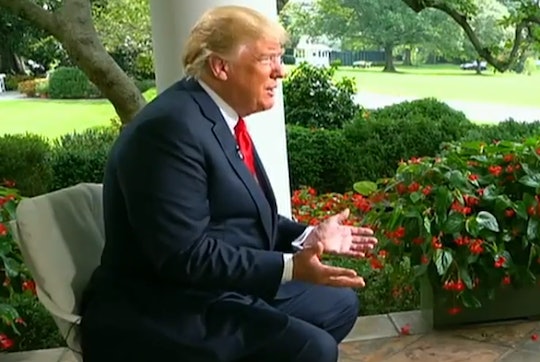 The 8 Most Bizarre Quotes From Donald Trump's Latest Interview

President Donald Trump is normally content to sit back and watch Fox and Friends each morning while frantically tweeting quotes that paint him in a favorable light. But on Wednesday, during the worst week of his political career (so far), he decided to cut out the middleman (Twitter) and grant an audience to his cheering section. Donald Trump's Fox News interview, which aired on Thursday morning, was pretty bonkers. The segment was chock full of Trumpian double-speak and nonsensical braggadocio, as one might expect, but what's particularly notable is the fact that it was only an "interview" in the loosest sense of the word.

Host Ainsley Earhardt asked one softball question after another, allowed Trump to utter countless falsehoods, and didn't bother to follow up on any unanswered (or poorly answered) questions. It makes you wonder, what was the point of all this? Was any new information revealed? Was anyone's opinion changed? The entire ordeal seemed to be nothing more than a live-action stream of Trump's typical early-morning tweets; a televised sermon during which he preached only to the choir. For those who aren't buying what he's selling, though, it makes for some decent entertainment. Here are some of the most bizarre moments.

After Michael Cohen, Trump's longtime personal attorney and fixer, rolled on him in federal court on Wednesday, Trump tried to play it off like he was some low-level intern. "He was somebody that was probably with me for about 10 years, and I would see him sometimes," Trump said, later reiterating that Cohen was "not somebody that was with me that much." OK, but when he wasn't with Trump, what exactly was he up to? Cohen "didn't do big deals, [he] did small deals," Trump claimed. "I don't know if he was a fixer. I don't know where that term came from." I do!

Regarding Cohen's courtroom admission that he committed campaign finance violations "in coordination with and at the direction of a candidate for federal office," Earhardt asked, "Did you direct him to make these payments?" Trump's response: "He made the deal. He made the deals." Yes, we know that, but did you direct him to do so? Earhardt notably didn't reply. Also: "Are you considering pardoning Paul Manafort?" Non-answer: "I have great respect for what he's done in terms of what he's going through." And one more: "Will you fire Sessions?" Non-answer: "When everybody sees what's going on in the Justice Department, I always put justice now with quotes. It's a very, very sad day. Jeff Sessions recused himself, which he shouldn't have done. Or he should have told me."

Cohen's campaign violations "weren't crimes," Trump claimed, and were "totally unrelated to the campaign." Forgive me, but I thought that's literally all they were: crimes related to the campaign. No? "Those two counts aren't even a crime. They weren't campaign finance." Wait a sec, are you sure? "What Michael Cohen pled to weren't even campaign related. They weren't crimes." But that doesn't make any — "They put the two counts of campaign violations in there, but a lot of lawyers on television, and also lawyers that I have, say they're — they're not even crimes." Oh, I get it now. Sure.

For the record, Time found two real lawyers — with names! — who went on the record with their expert opinions: "There's no way a federal judge would let someone plea to something that wasn't a crime,” said former federal prosecutor Renato Mariotti. "That's not how it works." And just for good measure, Professor Rick Hasen of the University of California, Irvine, who specializes in election and campaign finance law, also weighed in: "It's not only non-accurate, it's nonsensical. Why would you plead guilty to a crime that carries five years in jail if it was not a crime?"

Sticking To His Story

So those violations of campaign finance law that weren't crimes, and weren't related to the campaign... did Trump know about them, as Cohen asserted? "Later on I knew," he told Earhardt. "Later on." This contradicts his statements to a press pool in April when he was asked if he knew about the payment to Stormy Daniels, and he gave an unequivocal, "No. No. What else?" He was also asked if he knew where the money came from, according to Politifact, to which he replied, "No, I don’t know. No." Four weeks later, however, his replacement attorney Rudy Giuliani happily volunteered to Fox's Sean Hannity that Cohen "Funneled it through a law firm, and the president repaid it." And of course, there's also the audio recording of Trump and Cohen discussing their plan to pay off former Playboy model Karen McDougal.

So why would Cohen agree to go to jail for committing a not-crime? And why did he say the president conspired with him if he knew later on/didn't know about it/totally knew about it and offered for it in cash? "It's called flipping, and it almost ought to be illegal." Wait a sec, testifying about crimes in court should be illegal? Why? "For 30, 40 years I've been watching flippers. Everything's wonderful and then they get 10 years in jail and they — they flip on whoever the next highest one is, or as high as you can go." Yeah, dude, that's how our justice system works. That's bad? "It — it almost ought to be outlawed. It's not fair." Seems legit.

It All Comes Back To One Thing

Clearly, Trump's of the "Snitches get stitches" school of thought, which is backed up by former FBI director James Comey's infamous claim that Trump once told him, "I need loyalty, I expect loyalty." But what will that get you in return (besides up to 65 years in federal prison)? Just ask Jeff Sessions, the highest ranking law enforcement official in the country who may or may not be on the verge of getting fired. "The only reason I gave him the job," Trump said, was "Because I felt loyalty. He was an original supporter. He was on the campaign."

The Presidency, Through Trump-Colored Glasses

If the Democrats take back Congress after the midterms, Earhardt asked Trump, does he think they'll try to impeach him? "I don't know how you can impeach somebody who's done a great job," he replied. Well, here's a handy primer, courtesy of the subreddit "Explain like I'm five." And just to clarify how "great" of a job he's doing, Earhardt asked Trump to assign himself a letter grade. He gave himself the same grade as he did when she asked him that question in February 2017, as well as when her co-host Steve Doocy asked him last April, and when absolutely nobody asked him at a press conference in May: "I give myself an A-plus." Sure, the nation's top political scientists unanimously disagree, but don't bother telling him that. If it's not on Fox & Friends, it's fake news.