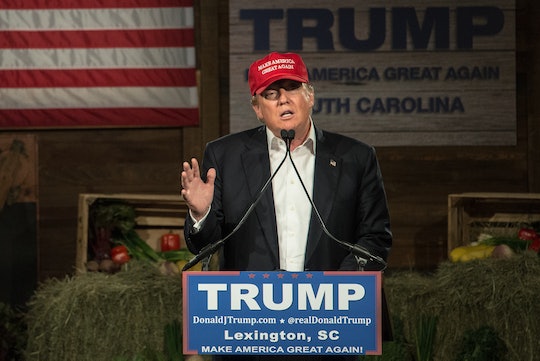 Come on people, the real reason real estate mogul Donald Trump isn't appearing at the GOP debate tonight at Drake University in Des Moines, Iowa isn't because he's frustrated with the establishment. It's so that Trump can live-tweet the GOP debate. Sure, he has some issues with moderator Megyn Kelly, who Trump has argued is biased against him and purportedly badgered him in past debates, but according to The Washington Post, the billionaire and GOP front-runner has long "objected to the participation of Fox News anchor ... Kelly as one of the three moderators, claiming she has treated him unfairly" in the past — specifically at the very first Republican primary showdown last August. While Trump claimed he would be skipping Thursday's debate as a result of the network's unwillingness to replace Kelly, I think it's clear he just really wants to insult people on Twitter.

The Trump I've come to know over the past six months seems neither willing nor able to back down from a challenge. I suspect his decision to not appear at the final debate before the Iowa caucus might also just stem from the fact that Trump is cocky AF. He's pretty much announcing to his competitors that he doesn't need the nationally televised arena to spread his opinions and take a stand on the issues. Not only does Trump lead in the polls, according to NBC as of Jan. 28, he's got an iron grip on Twitter too. Sure, he's also holding his so-called "event" on Thursday night to celebrate veterans, but you know he'll be live-tweeting the GOP debate with just as much oomph as Kayne West has when he feels like someone's distracting from his creative process.

Here are just a few of the things he's said on Twitter about the GOP debate so far:

Trump might be too busy for political correctness, and it so seems, too busy for his party's final debate before the Iowa caucuses. This isn't the last you'll hear from Trump about why he skipped the debate, of that I'm sure.