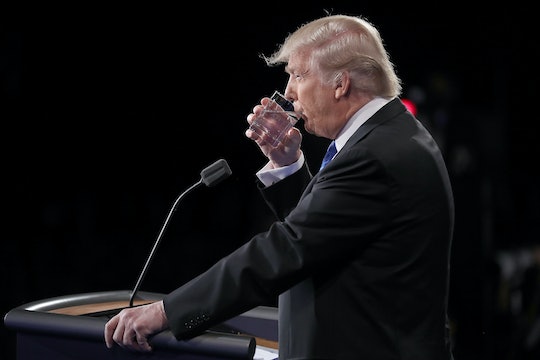 On Monday night's first presidential debate, Donald Trump attempted to discredit Hillary Clinton several times, mostly by interrupting her mid-sentence. At least according to Twitter, his words might have had more weight had he managed to make them without grammatical mistakes. So of course, Donald Trump's grammatical errors lit up social media. This is hardly the first time that Trump's cavalier relationship with grammar and the English language has come under fire. Trump is a prolific tweeter, and doesn't often appear to have time for things like spell-check (or fact-check for that matter).

One of my personal favorite Trump mistakes came in a tweet following his primary debate, in which he called Marco Rubio a "leightweight chocker," by which he presumably meant "lightweight choker." In his debate with Clinton, he made several other grammatical mistakes. While this is not necessarily indicative of errors in the content of his speech, it certainly does cast something like doubt on his judgment.

It has always been an intrinsic part of the Trump campaign that he is not a politician, and appeals more to the "everyman." But it has likewise been a criticism of him that he does not appear presidential. Part of this impression is likely due to his near constant language errors. Twitter expressed its frustration with Trump's grammar problems beautifully, as usual.

Trump can be eloquent, in a sense, when he wants to be, but his rhetoric is usually totally unconcerned with things like sentence structure and grammar generally. In contrast, President Obama is a gifted orator for the clarity of his message and his mass appeal, which he does without the common phrasing issues an average person might come across in a heated debate across a table at a bar. But this is how Trump constantly comes across when he debates. This is a major reason that Obama comes across as intelligent and, well, presidential, while Trump can sometimes come of irate, or at least, easily flustered.

Trump's final malaprop of the evening was his apparent inability to totally grasp the meaning of the word "temperament."

In response to this, the audience burst out laughing, not even Trump himself could really keep a straight face. For her part, Clinton did a little shoulder shimmy, and launched into a very thorough explanation of why this was possibly the most laughable thing that Trump said on stage that night. And that's saying something.