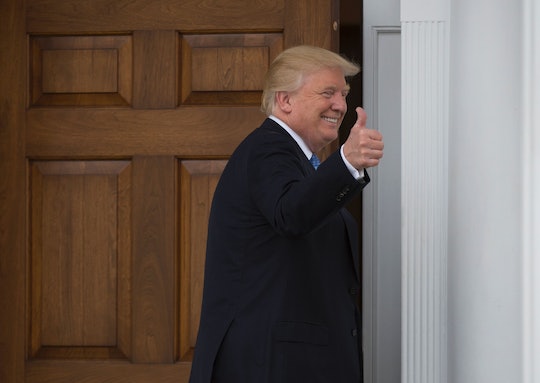 President-elect Donald Trump has a well-known penchant for Twitter. From outlining policy positions to ruminations on the state of the world, it's Trump's Twitter handle that has continued to give the public the most revealing look at the man who on Jan. 20 will be sworn in as the 45th President of the United States. But Trump's latest Twitter rant attacking the integrity of an election he won is something different.

Last night Trump released a tirade against CNN specifically, but called into question the legitimacy of American elections generally, promoting widely debunked rumors of widespread voter fraud, and even re-tweeting a 16-year-old kid from his feed. For a grown man, the behavior would seem simply erratic and unhinged, but for a President-elect, the behavior in downright dangerous.

It started with CNN's Jeff Zeleny, according to Mediate, who filed a report on AC360 and said, "Donald Trump is showing signs of being a sore winner." Mediate also reported Trump's allegations of widespread voter fraud were "blatant and baseless."

But Trump won, right? So why would he be hung up on suspected fraud against him that wasn't successful? He knows he won the election, right? He knows he's going to be the leader of the free world, right?

No matter. It seems Trump's feelings were stung by the report, so he started Tweeting Zeleny and calling him a bad journalist.

He started off with his signature "I am rubber, you are glue" attack, saying Zeleny didn't have proof that it didn't happen. See what Trump did there?

Notice he's also tweeting to what appear to be random folks from his mentions in addition to Zeleny, which is odd.

Here's another one. Notice he refers to himself in the third person again, and that @Filibuster is a 16-year-old Trump fan.

He goes back in after CNN, which incidentally employed Trump loyalist and former campaign manager Corey Lewandowski as a pundit to defend Trump throughout the network's election coverage.

Then early this morning, Trump got some good news about the Michigan election that made him happy.

But he's still upset with CNN and he's not going to let that go.

Then out of nowhere, inexplicably, Trump threatens American civil rights and the First Amendment.

This is how the President-elect is spending these last precious few weeks before taking office. For his part, Zeleny seemed to take the Twitter lashing from the PEOTUS in stride, responding with this:

This, of course, isn't the first time Trump has alleged widespread voter fraud. Last Sunday he accused the results in Virginia, California, and New Hampshire, three states that voted for Clinton, of being the result of voter fraud with this tweet:

Politifact investigated the allegations further, and spoke with election officials in those states and found, "It's a reckless claim with zero evidence."

So why is he doing this? Why would he diminish the role of president by throwing a tantrum on Twitter and pushing lies that weaken the very foundation of American democracy — free and fair elections?

First, there's the Infowars crew, a site run by conspiracy theorist Alex Jones, who has received plenty of support from Trump and vice versa.

"Donald Trump did not link to or directly cite the Infowars story, but he has been close to its founder, Alex Jones," NPR's Tamara Keith said. "And after the election, Jones said Trump had called to thank him. Jones is known for pushing conspiracy theories, including that the 2012 massacre at Sandy Hook Elementary School was fake."

Then there's the recount effort underway in Wisconsin, and the ones about to be initiated in Michigan and Pennsylvania by Green Party presidential candidate Jill Stein. That might be what's riling up Trump, but as Keith pointed out on NPR, "...Stein does not expect the outcome of the election to change. Neither do Hillary Clinton's lawyers."

So is all of this just about pride and hurt feelings? Someone needs to remind Trump that maintaining the dignity of the office of the president and protecting American democracy are his actual job now. Either that or take away his phone.