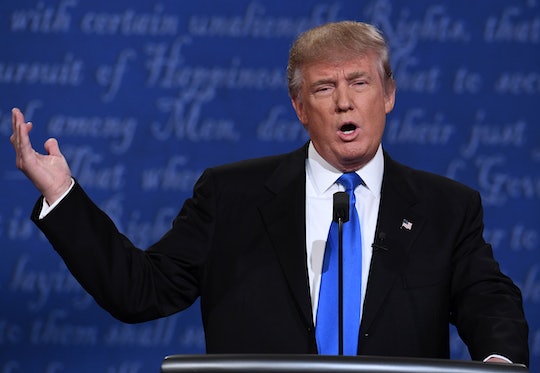 At the first presidential debate, moderated by Lester Holt and hosted by NBC at Hofstra University, Republican nominee Donald Trump trotted out some of his favorite rhetoric when questioned about gun violence, policing tactics, and the way institutionalized racism affects the police force in the United States: "law and order." Twitter immediately lit up with jokes about Donald Trump's Law and Order comments. You can practically hear the "dun dun" of the gavel punctuating each of these tweets.

Trump remarked at the debates:

"Secretary Clinton doesn't want to use a couple of words, and that's law and order. We need law and order. If we don't have it, we're not going to have a country. And when I look at what's going on in Charlotte, a city I love, a city where I have investments, when I look at what's going on throughout various parts of our country, whether it's, I mean, I can just keep naming them all day long. We need law and order in our country, and I just got today, as you know, the endorsement of the Fraternal Order of Police, it just came in. We have endorsements from, I think every police group, I mean, a large percentage of them, in the United States."

He went on to cite how "successful" stop-and-frisk practices were in New York City, and suggested that perhaps the same tactics were necessary in cities with high rates of gun violence, like Chicago. "African Americans and Hispanics are living in hell," he added. "You walk down the streets, you get shot."

Naturally, the soundbite inspired countless jokes about Law & Order, the TV show, which apparently holds a special place in the heart of anyone who has ever gotten distracted from a very important task with an SVU marathon.

Even Hillary Clinton's team sent out this tweet from her account mid-debate, though they somehow forgot to include any Mariska Hargitay gifs.

A writer from the show also weighed in, confirming that Trump could never play a good guy or a background character. (Though the fact that he's never had a cameo as himself on any installment of the Law & Order franchise is frankly, at this point, astonishing.)

It's so unfathomable, in fact, that it's easier to just self-soothe with Mariska gifs. Here you go: