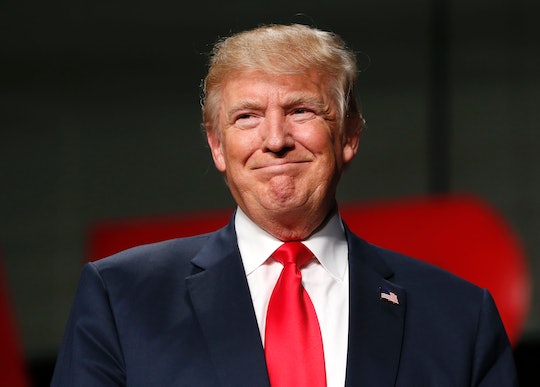 On the debate stage last month, Republican nominee Donald Trump mentioned that he thought not paying taxes was a "smart" thing business people should do, but reiterated that he would continue to refuse to release this full tax returns. On Monday evening though, The New York Times obtained copies of Donald Trump's tax documents that allegedly show how he avoided paying millions in personal income taxes. Not only did he avoid paying, but Trump allegedly used some barely legal loopholes to do so, according to The Times' investigation.

Trump didn't comment on the leak, but his campaign spokesperson, Hope Hicks, told the outlet that its reporters were misunderstanding the tax law. "Your thesis is a criticism, not just of Mr. Trump, but of all taxpayers who take the time and spend the money to try to comply with the dizzyingly complex and ambiguous tax laws without paying more tax than they owe." She added, "Mr. Trump does not think that taxpayers should file returns that resolve all doubt in favor of the I.R.S. And any tax experts that you have consulted are engaged in pure speculation. There is no news here.”

But according to other documents obtained by The New York Time, even his own lawyers at the time warned against using the move, because if he were to be audited, it would look bad.

The tax documents are a part of Trump's 1995 returns and were leaked to The New York Times last month. Since then, experts have since been poring over them to see how Trump could avoided paying millions of dollars in income tax throughout the 1990s. The loophole, or "maneuver" as tax experts call it, was so shady that Congress eventually outlawed it, according to The Times. Basically, he didn't pay taxes on cancelled debt, which is technically income.

Steven M. Rosenthal, a senior fellow at the nonpartisan Tax Policy Center, and who also helped write tax policy in the '90s told The New York Times,“Whatever loophole existed was not ‘exploited’ here, but stretched beyond any recognition."

It's a little complicated but boiled down the "stock-for-debt swap," as it's known in the business is basically a means of double dipping. It goes like this. Let's imagine a company, like Trump's basically bankrupt casinos in the '90s, can only pay some of a bank loan back. Because they're a big company and wheel and deal and aren't like us regular people, the bank actually forgives the remainder. But that remainder is then taxable income.

Not if you're Donald Trump and have fancy tax lawyers. Instead, you can take that remainder and swap it for stock (even if the market value of the stock wasn't worth anything near the amount at the time) and make it look like that entire loan was paid back in full. The New York Times tax experts liken it to "waving a magic wand" and making a tax bill disappear. Trump allegedly skipped out on millions of dollars of tax bills on other peoples' money.

Trump maintains that being able to pay lawyers to game the tax code is entirely legal and ethical and necessary (since he also maintains that the tax code is too complicated). He also considers himself "smart" for not paying taxes. Maybe that's true — maybe large corporations and Wall Street have every right to milk the system in their favor. But if every corporation and rich person (or at least anyone wealthy to have lawyers write recommendation letters about how to get out of paying the tax bill) didn't pay taxes, there'd be no money to make the military stronger, fix infrastructure, or build a yuuuuuge wall on the Mexican border.

By allegedly not paying taxes for some years, Trump deprived his fellow Americans and the country he loves so much of the financial support it could have used — to take care of vets, fund police departments and schools, to simply run a country. Not wanting to pay more than what's fair is one thing. Not wanting to pay at all is an entirely different story.