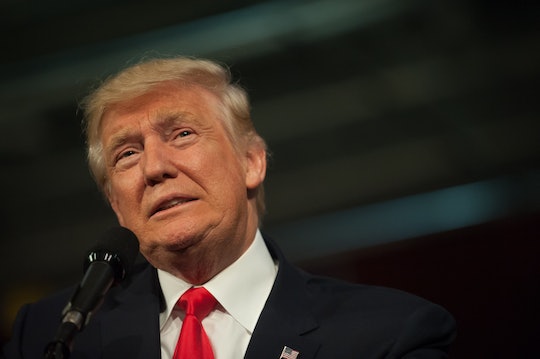 On Tuesday, protesters crowded around Speaker Paul Ryan's office calling on him to un-endorse Republican nominee Donald Trump, according to the Huffington Post. They were kicked out of the building for being disruptive, but they weren't in the wrong entirely. One of their banners read, "The GOP has always been an old boys' club #GOPCausedTrump," according to ThinkProgress. And they're right. Although not all Republicans have made comments about women and sexual assault similar to Trump, several have. And a quick look into the GOP's past tells us that Trump's comments, and his "locker room talk" defense, are not an anomaly among the GOP.

As a refresher on the leaked Access Hollywood tape, Trump described in lewd terms kissing and groping women without consent:

In addition to a 90-second apology about the comments, Trump defended his statements by repeatedly calling them "locker room talk," according to the New York Times. The defense is telling Americans that men commonly speak like this — in crude and lewd terms about assaulting women — amongst each other. It's a "boys will be boys" defense, pushing the myth that this kind of talk is normal, that it's just how men are naturally inclined to talk and act, that women just have to deal. Several prominent men who spend a lot of time in locker rooms have debunked this myth. Also, Trump was not in a locker room. But these points are irrelevant to Trump's message, which is that his comments were just harmless words between men.

Of course, we know that words are not "just words." Words can intimidate, traumatize, incite, stigmatize, and much more. And Trump's comments from the tape aren't the first time members of the GOP have used words to contribute to rape culture. It's not at all unheard of in the party for lawmakers to perpetuate rape culture by touting myths about women, sexual assault, and victims of sexual violence.

In 1990, a Republican lawmaker in Maine named Lawrence Lockman said in an interview, “If a woman has (the right to an abortion), why shouldn’t a man be free to use his superior strength to force himself on a woman? At least the rapist’s pursuit of sexual freedom doesn’t (usually) result in anyone’s death.” Rightfully, the public freaked out about the comments because Lockman implied that abortion and rape are equally heinous crimes. But what's more important in regards to rape culture is that Lockman suggested that a rapist is just pursuing "sexual freedom" during a rape. His statements, in essence, meant that men have sexual freedom, and they should be free to pursue those freedoms — even if the pursuit is unwelcome, which is actually rape. Lockman apologized for the comments, 24 years later.

In a similar shift away from blaming the rapist, GOP senatorial candidate Richard Mourdock said sometimes rape and its byproduct can be god's will, according to CBS News. "I struggled with it myself for a long time, but I came to realize life is that gift from God," he said. "And I think even when life begins in that horrible situation of rape, that it is something that God intended to happen." He agreed with presidential hopeful Rick Santorum that god may have intended for the rape to happen, meaning the rapist really wouldn't be at fault for acting out god's will.

Besides refusing to blame sexual attackers outright, there's nothing that contributes more to rape culture than minimizing rape, which is what several GOP members have done. In 2012, Republican Senate nominee Todd Akin of Missouri famously tried to deem certain kinds of rape "legitimate," implying that other "kinds" of rape were not legitimate. He also said there were ways for the body to "shut that down," suggesting the consequences of rape might not be as horrid as we might assume. In fact, one West Virginia lawmaker actually said there might be a "beautiful" consequence of rape, such as pregnancy and the creation of a new life. All of the GOP politicians have apologized for their comments, but that doesn't erase the fact that they said it and believed it at one point.

And even today, Trump isn't the only person in the GOP making horrible comments about sexual assault. Alabama Sen. Jeff Sessions said he would not characterize the behavior Trump described as sexual assault, according to the Weekly Standard. Sessions was wishy-washy about what exactly he thought of Trump's comments, and did later apologize. But it's clear that either a rampant misunderstanding of sexual assault is present in the Republican Party, or the party members are simply used to being in a boys' club, where "boys will be boys," men won't be held accountable for their actions, and sexual assault isn't all that big a deal.

Obviously, not all members of the GOP believe things like this — not even a majority. But many have proved that they believe these things, and for that reason, Trump isn't an anomaly or an outsider to the GOP boys' club. He fits right in.