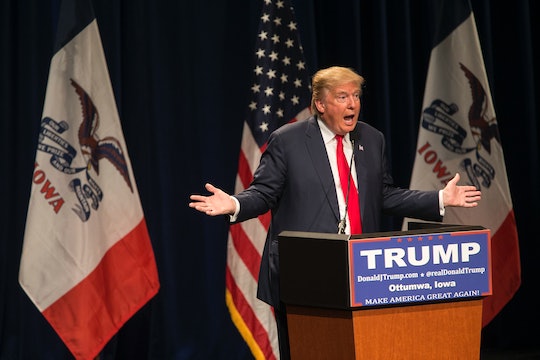 Donald, Donald, Donald. You say you don't care, and yet, here we are once again. In a random, hostile move on Monday, billionaire mogul and GOP presidential front-runner Donald Trump tweeted a sexist jab at Megyn Kelly, claiming that the Fox News lead anchor was "average" and essentially unloveable. Because that's exactly what he needs to be doing at this point in election season, right?

If you're not quite sure what got Trump so steamed up this time, that's okay — it's all a little blasé to be honest. If you're still invested, here's the basic gist: In a recent Vanity Fair profile, Kelly — whom the outlet lovingly dubbed "Fox's first lady" — explained to the interviewer that, prior to his tyrannical 2016 GOP presidential bid, Trump had been a fan of her work. "He would send me press clippings about me that he would just sign 'Donald Trump,'" Kelly recalled. "And he called from time to time to compliment a segment. I didn’t know why he was doing that, [but] then when he announced that he was running for president, it became more clear."

Of course, as The Washington Post's Callum Borchers pointed out on Tuesday last week, Trump probably never meant to approach Kelly in a creepy, sexual way. In fact, Borchers noted, "Trump has a habit of sending handwritten notes ... to many media personalities ... [his missives to Kelly were] nothing unusual for him."

Still, this is where things get a little more tangled. According to Kelly, once the anchor had figured out Trump's game, it was all over. "I can’t be wooed," Kelly told the Vanity Fair interviewer, insinuating that Trump's brown-nosing wouldn't earn him any extra favors in the media. "I was never going to love him, and I was never going to hate him."

Seems like a logical conclusion for a journalist to reach, right? Not according to Trump. In a nasty tweet on Monday afternoon, Trump, who had no doubt just skimmed through Kelly's Vanity Fair profile, came out swinging.

".@megynkelly recently said that she can’t be wooed by Trump," the billionaire tweeted. "She is so average in every way, who the hell wants to woo her!"

Aside from the obvious grammatical errors in that tweet (shudder), there are so many things wrong with that statement. First of all, given the fact that The Kelly File anchor drew about 2.434 million viewers in the first week of her new Fox show back in 2014 (at times coming in ahead of the popular O'Reilly Factor), it seems pretty clear that at least some people out there think she's pretty great. Coupled with the fact that she's been married twice (it's okay, her first marriage ended amicably and the two are still friendly), I think it's safe to say that at least two people want to "woo her."

The real issue at hand here is the way Trump launched his attack. Rather than pointing out that he didn't need her support to stay at the top of the polls (seriously, the guy could purposely run over a baby deer at a campaign rally and people would still vote for him), he opted to point out her physical appearance and make angry quips about how she was undateable. Given all the terrible ways he's previously come down on Kelly — and basically any woman who dares disagree with him — it makes everything that much worse.

Not that anyone should be surprised. This is the same man who's currently running a furious campaign against Democratic front-runner Hillary Clinton by relentlessly pointing out her husband's past infidelities. It's also the same man who took down Republican opponent Carly Fiorina by joking in a September interview with Rolling Stone, "Look at that face! Would anyone vote for that?"

For the moment, Trump's anti-woman rhetoric may be getting him plenty of press time and coveted headline space, but in the grand scheme of things it's further proving to the public that he just can't let go of a grudge and cementing him in the annals of history as the country's biggest — how should I put this? Loser.

There's a Trumpism for ya, Donald.