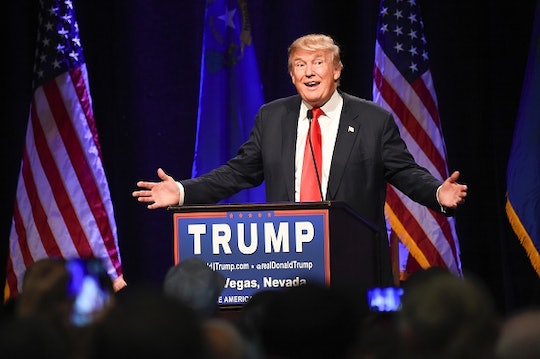 Things got a little rowdy during Donald Trump's campaign rally on Monday night in Las Vegas. Maybe attendees were running on the idea of "what happens in Vegas stays in Vegas," or perhaps they simply took some inflammatory opinions a little far. Either way, it was not a pretty sight at the Republican party nominee's rally.

Buzzed reports that the chaos began when Trump brought a supporter on stage to share how his son was killed by an undocumented immigrant. But the story was interrupted when protestors began shouting, "that's why we need gun control." This comment lead to booing from the crowd and a circle being formed around protestors. Security quickly interfered and began pulling the protestors to exits to the cacophony of cheering supporters.

And Trump didn't help matters. According to the National Post, as a protestor was removed, the businessman said from the stage, "Do I hear some noise over there? Yes, I do. Bye-bye!" Media captured the supporters being dragged out, with one resisting and yelling about the First Amendment.

When one protestor fell, a supporter yelled, "Light the motherf*cker on fire," while others shouted "Kick his ass!" and "Shoot him!." (Because, yeah, that's not scary at all.) NBC reporter Benjy Sarlin said one supporter shouted the Nazi-era greeting of "Sieg hiel!" during the rally, while another claimed the protestor was, "a Muslim guy."

This is not the first Trump rally that has turned violent. At past rallies, Trump supporters have ripped protestors' signs, pulled hair, yelled obscenities, and been physically removed. One of Trump's bodyguards even allegedly punched a protestor in the face.

I get it. Campaign rallies are passionate, fiery places. And Trump brings out strong feelings in people — both protestors and supporters — and that leads to some clashes of opinion. But the scary thing is that people are not stopping at merely opinions. There is actual violence occurring at Trump's rallies, and someone who would like to be president of the United States is not discouraging it.

From afar, it's hard to believe these occurrences are actually happening. But they are, and it should scare everyone. The fact that a presidential candidate is mocking protestors who are being physically dragged out and suggesting that they be "roughed up" may just be an attempt at a media grab, but I'd rather see a leader take the helm in the U.S. who, when seeing violence, tells people to stop — regardless of whether or not they're his fans.