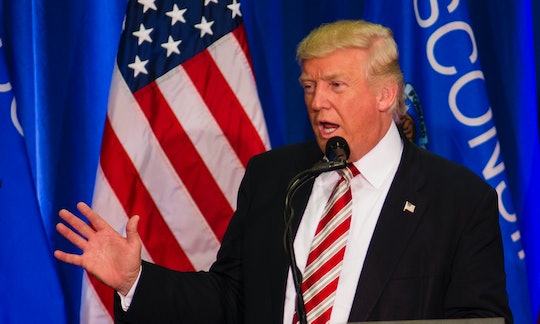 If Donald Trump has long won over his supporters by never backing down from his inflammatory statements, is it too late now to say sorry? After the Republican presidential candidate issued a rather vague, general apology on Thursday, it will be interesting to see if this switch in strategy will affect Trump's most recent polling numbers, which (at the moment) are looking decidedly bad for the real estate mogul.

In case you missed Trump's semi-apology, here's the run-down. According to ABC, Trump told supporters at a campaign rally in North Carolina last night:

Sometimes, in the heat of debate, and speaking on a multitude of issues, you don’t choose the right words or you say the wrong thing. I have done that, and believe it or not I regret it. I do regret it, particularly where it may have caused personal pain.

It's a move that Trump's newest campaign manager, Kellyanne Conway, said was entirely his. "That was a decision he made. Those are his words," she told ABC, adding that he "may" even apologize directly to Captain Humayun Khan's parents in the future. Whether the public believes that Trump's apology was a personal decision or a campaign tactic, however, doesn't really matter much. What will be much more interesting is to see how his expression of "regret" goes down among Republicans.

The thing is, there are many Republicans who would probably like to see a more apologetic, politically-pleasing Trump, and seeing Trump pivot could stop the train of elected Republicans currently backing out of supporting him (oh hello, Rep. Richard Hanna, Sen. Susan Collins). After all, the GOP would likely stand stronger and more united if its presidential candidate stopped insulting veterans, Mexicans, and women.

However, in polls, Trump has already lost support from traditionally Republican demographic groups, according to CBC: not only is he failing to win over women and minorities, he's not gaining the necessary support Republicans traditionally gain from white, male, wealthy voters. His recent apology could be an attempt to win them back, but if the damage has already been done, a change in campaign tactics this late in the game might not repair it.

In fact, Trump's apology could actually harm his campaign. Considering that many of his supporters have backed him due to his tendency to "tell it like it is," backtracking and apologizing for past comments could make it seem like Trump is trading his forthcoming ways to pander for votes, coming off as insincere. And American voters insist on characteristic honesty (Hillary Clinton's perceived untrustworthiness, for example, has been one of her biggest battles during this election).

Not only does Trump's apology fly in the face of his usually unbending manner, apologies are also — oddly — not something voters want from their leaders. According to The Washington Post, people who back down from disputes are generally judged as less likable, and those who are overconfident, social risk-takers are judged more positively. Often, apologizing can have more damaging consequences for a politician's reputation than standing firm would.

According to a Real Clear Politics average, Trump is at 41.2 in polls, trailing six points behind Clinton, who is at 47.2 at this point. No new poll results have emerged since Trump's apology, but chances are good that, when they do, the results will be surprising. It might be a bit too late in the game for Trump to suddenly change his ways.