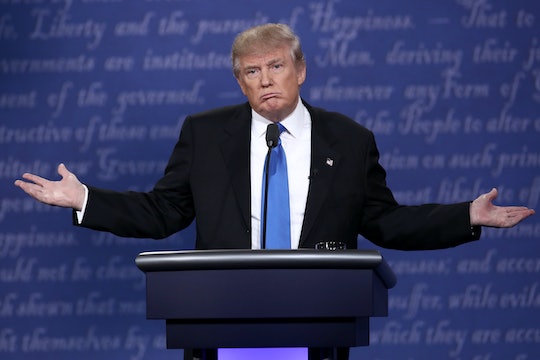 Most folks expected some pretty bizarre moments at the first presidential debate at Hofstra University in New York this week, but Republican presidential nominee Donald Trump's comment about Palm Beach really took the cake. During a discussion of crime in the United States, Trump asserted that Palm Beach is a "tough" community — an interesting assessment that was immediately questioned on social media.

For context, the community that Trump referred to here is one that he should be intimately familiar with: He opened a country club there. During the debate, Trump asserted that Palm Beach, Florida is a "tough community, a brilliant community, a wealthy community. Probably the wealthiest community there is in the world…" It's not clear what Trump meant by "tough," but the entire statement didn't make sense. According to a fact-check at Politico, Palm Beach isn't exactly "tough," but neither is it the "wealthiest community" in the world — not by a long shot.

Specifically, Politico points out that the "median household income for Palm Beach County in 2015 was $52,878," which isn't much above the national average. At any rate, the reason Trump brought up Palm Beach is because, according to him, the club he opened there didn't discriminate against African Americans or Muslims. "And it's a tremendously successful club," Trump added. "And I'm so glad I did it. And I have been given great credit for what I did."

Here, Trump was referring to the Mar-a-Lago, a Palm Beach property that he purchased in 1985 and converted into a high-end country club in the mid-'90s. According to a 1997 The Wall Street Journal article about the club, the "old money" social elite of Palm Beach didn't like Trump, and they didn't like that his club was open to Jewish and African American patrons. The Journal spoke of a clash "between a patrician aristocracy and a band of new-money colonizers led by the brash, boastful and ostentatious Mr. Trump."

At the time, Trump filed a lawsuit against the town of Palm Beach itself. The lawsuit argued that the town was discriminating against the Mar-a-Lago, allegedly in part because the club allowed Jewish and African-American guests. Romper reached out to the town of Palm Beach and the Mar-a-Lago regarding the allegations, but did not immediately hear back at the time of publish. The town rebutted that at issue was a zoning law, not a discriminatory ordinance. At the time, even the Anti-Defamation league expressed concerns that Trump's allegations of discrimination were done for "his own mercantile ends."

Whatever the case, what's certain is that when Trump initially purchased the Mar-a-Lago property in 1985, he struck a deal with the federal government that allowed Trump himself to put down "only $2,812 of his own money," according to Politico.

And now, decades later, Trump is looking to head up the very federal government that he had so artfully swindled. Who said there wasn't room for irony at the debates?