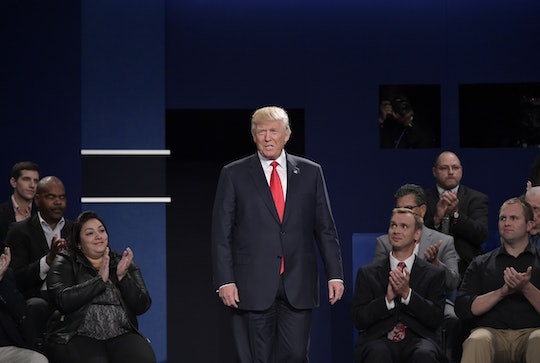 By Sunday night, it was safe to assume voters or would-be voters watching the second presidential debate at Washington University in St. Louis, Missouri, had listened to leaked audio, published by The Washington Post that featured Donald Trump describing, celebrating, and admitting to "grabbing" a woman "by the p*ssy" and making unwanted advances on married women. What was surprising, however, was Trump’s decision to hold a pre-debate press conference with Bill Clinton's accusers, namely, three women who have accused Clinton of rape and/or sexual assault. Even though the allegations brought against the former president and potential First Gentleman have yet to be substantiated, Donald Trump’s press conference should upset every sexual assault victim.

More Like This
Bindi Irwin Has Been Sharing The Cutest Photos Of Her Daughter
Wait, Did The Government Actually Do Something For Parents?
Everything You Need To Know About The Proud Family Reboot Coming To Disney+
A Volleyball Coach Wasn’t Allowed To Bring Her Breastfeeding Baby Into A Tournament

As a sexual assault survivor myself, I do not and cannot feel any ill will towards Paula Jones, Juanita Broaddrick, Kathleen Willey, and Kathy Shelton.(Jones sued Clinton for sexual assault in 1994, and the case was settled out of court in 1998. Willey’s allegations of sexual assault never made it to court, as an independent prosecutor claimed there was "insufficient evidence to prove to a jury beyond a reasonable doubt." Shelton's story made headlines because Hillary Clinton was appointed to defend her alleged rapist, and Broaddrick recounted sworn testimony of her accusations against Bill Clinton in 1998.) I know, first hand, how difficult it is to tell your story — whether you’re in a hospital room with a nurse and detective, or you’re sitting next to the Republican presidential nominee during a press conference. I applaud them for their bravery and I am in awe of their strength. My issue is not with these brave alleged victims and survivors. My issue, however, is with Donald Trump.

Prior to the presidential debate, on October 7, 2005 audio from an Access Hollywood interview was published by The Washington Post and featured Trump boasting not only about a failed attempt to sleep with a married woman, but also about grabbing and kissing women without their permission because “he’s a star,” and when a man is a star or in a position of power, “they let you do it." He all but bragged about grabbing women “by the p*ssy," noting that he doesn't wait to kiss them, disregarding consent as well as a woman’s right to bodily autonomy altogether.

Based on his comments, I don't think that Trump cares about any of the women who sat next to him during that press conference. It's why I don't believe him when he called these women "brave" or when he said that he had their best interests — the desire to be believed without enduring relentless victim-blaming — at heart. I don't think he sat next to those women for anything other than his self-interest because, unfortunately, you only have to look an inch into his past to see exactly how he feels about the very same women he used to reiterate he isn't someone who condones and engages in sexual assault, or is someone he believes to be "as bad" as Bill Clinton.

If he was really and truly sorry for the words he said and the actions he described, he wouldn't exploit the alleged pain of others. If he truly felt for these women and wanted to fight for justice for them and wanted to help them find the peace every sexual assault victim seeks, he wouldn't have gathered these women in front of cameras to make himself look like a champion of women.

In 1998, Trump called Paula Jones — a woman who accused Bill Clinton of sexual assault and brought an ultimately unsuccessful lawsuit against him in the '90s — "a loser," and said her allegations against Clinton has "been proven false." He was quick to victim blame Jones for what happened.

It's hard for me, a sexual assault survivor, to think Trump has changed in the 20 or so years since he not only called a woman a loser for accusing someone he is now, also, accusing of sexual assault. He has proven time and time again that he's a man who continues to disregard, degrade, and offend women — cushioning it all as "locker room banter," as if that's somehow an excuse for his behavior. While Trump did issue an apology via Facebook live, admitting that he's "not a perfect person" and his words "do not reflect" who he is, I don't buy it. His backtracking sounds very much like the words of an abuser, someone who apologizes when they're caught, pretends their words and actions are not as powerful as they are by equating them to "locker room banter," and finds anyone else to blame for their own actions.

I will blame Donald Trump for using these women and their allegations to further his political gains in his pursuit of political power.

It's hard for me, as a sexual assault survivor, to watch Trump parade around alleged sexual assault survivors for nothing more than a "you did it first" political stunt. It's hard to think that what those women may or may not have gone though is now being used for his personal gain. If he was really and truly sorry for the words he said and the actions he described, he wouldn't exploit the alleged pain of others. If he truly felt for these women and wanted to fight for justice for them and wanted to help them find the peace every sexual assault victim seeks, he wouldn't have gathered these women in front of cameras to make himself look like a champion of women.

I won't ever blame these women for choosing when and where to share their stories. I won't victim blame them, or assume they're lying. As a survivor of sexual assault, those are both things that have happened to me and so I'd never, ever, do them to someone else. However, I will blame Donald Trump for using these women and their allegations to further his political gains in his pursuit of political power.