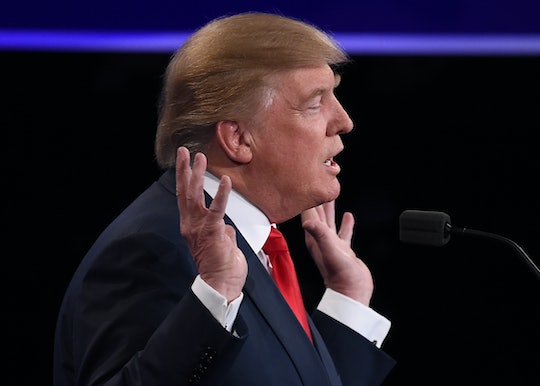 During the third and final presidential debate, the two candidates debated the acceptability of abortions and Republican nominee Donald Trump had a lot to say about the subject. Responding to Democratic candidate Hillary Clinton's defense of late-term abortions, Trump went on a tangent, saying that to, "rip the baby out of the womb" was not OK — not once, but twice. However, Trump's "rip the baby" rant was not only terribly sexist, but also completely and totally flawed.

When responding to Clinton's view on late-term abortions, Trump said:

First of all, Trump basically told women across the United States that it doesn't matter whether they think late-term abortion is OK — it only matters that he doesn't think it's OK. Never mind the fact that late-term abortions only make up 1.5 percent of abortion procedures in the country, or that women are often driven to late-term abortions due to the high cost of abortions, fetal anomalies that appear late in the pregnancy, or danger to the mother's life, according to The Washington Times.

Second of all, Trump said Clinton supported abortions "on the final day" of a woman's pregnancy — which isn't quite the view Clinton has taken on late-term abortions. In 2007, she said she wanted to make abortions "safe, legal, and rare." More recently, during an interview with ABC in February, Clinton explained her view on late-term abortions, essentially saying she understood restrictions on them as long as a few extenuating circumstances were taken into account. She explained:

You know, I think that the life and health of the mother, obviously, rape and incest, have to be always taken into account. And, you know, when [Marco Rubio] raises the, you know, very, very difficult issue of late-term abortion, he conveniently overlooks the fact that there are medical reasons, there are health-related reasons.

Finally, when it comes to "ripping a baby out" on the final day of a pregnancy, that's just, well, not really something that happens. "Third-trimester abortion is very uncommon," Daniel Grossman, professor of obstetrics, gynecology, and reproductive sciences at the University of California, told PolitiFact in February. "Nobody would talk about abortion on the woman’s due date. If the mother’s life was at risk, the treatment for that is delivery, and the baby survives. Medically, it does not compute."

Late-term abortions aren't common, and they're often a product of expensive abortion procedures that lock lower-income women out of earlier abortions — if not of extenuating circumstances that endanger the baby or its mother. That's something Clinton has already acknowledged, and if Trump wants to lower the already low number of late-term abortions, we'll need to improve women's access to affordable, safe abortions across the country instead of inhibit it.

More Like This
How To Watch 'Frosty The Snowman' This Holiday Season
Kirstie Alley’s Kids Remember The Actress As An “Amazing Mother & Grandmother”
An Ode To Kirstie Alley & Her Messy Self
Pinterest Predicts Their Top 2023 Trends In Parenting, Beauty, Fashion, Home, & More