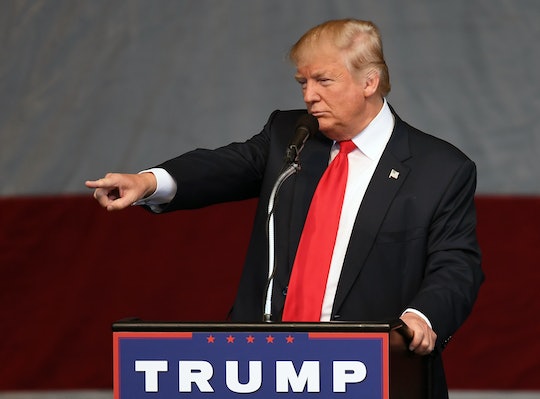 Video footage obtained by the Washington Post revealed disturbing comments made by Republican nominee for president Donald Trump and Billy Bush on the set on an Access Hollywood interview almost 11 years ago. While the disgusting commentary is cause for incredible concern, it's Donald Trump's statement about Access Hollywood tape that raises yet another terrifying, sexist, hypocritical red flag for the man who's hoping to assume the role of Commander-in-Chief roughly one month from today. Said Trump in a statement to the Post:

This was locker room banter, a private conversation that took place many years ago. Bill Clinton has said far worse to me on the golf course - not even close. I apologize if anyone was offended.

Romper reached out to Trump regarding the tape but had not yet heard back at the time of publication. The comment highlights Trump's continued attempts to shift the conversation back to Democratic presidential nominee (and former Secretary of State) Hillary Clinton's marriage. Trump, of course, has tried to redirect the conversation to Clinton's husband's failings as a partner at every possible turn. In an interview that appeared in the New York Times just days ago, Trump said:

Hillary Clinton was married to the single greatest abuser of women in the history of politics. Hillary was an enabler, and she attacked the women who Bill Clinton mistreated afterward. I think it’s a serious problem for them, and it’s something that I’m considering talking about more in the near future.

Unsurprisingly, this comment shows just how desperate Trump is to establish that he's "nothing like" Bill Clinton. The Access Hollywood footage says nothing at all about Clinton — but it spells out everything voters need to know about Donald Trump.

In an email sent to Page Six ahead of the October 9 debate, Trump "made clear" that he wanted to win the debate without riding on the coattails of the former president's infidelities. Said Trump:

I want to win this election on my policies for the future, not on Bill Clinton’s past. Jobs, trade, ending illegal immigration, veteran care, and strengthening our military is what I really want to be talking about.

It'll come as no surprise, however, that after the tape surfaced, Clinton was the first person Trump pointed a finger at. The idea in bringing Clinton up is to juxtapose the two men.

Trump may be bad, yes, but in his own opinion, he's not nearly as bad as Clinton. Perhaps Trump separates men into categories: Men Like Clinton, and then Men Like Him, and so long as he can say — and believe, in his own twisted way — that he is a man who is not like Bill Clinton, then he sees his behavior as "fine," or acceptable, even. Unfortunately for Trump, it isn't a competition.

The fact that Trump feels the need to continuously bring up Clinton's past infidelities reveals, in large part, the status of his campaign: he can't attack Clinton on failed policies or programs, so instead he reaches for the dangling rope, the one thing that's easy enough to grab. In Clinton's case, that's the issue of her husband. But it isn't a him vs. me issue, and it never has been. The bottom line is there is no excuse for way Trump treats women. The Access Hollywood tape is yet another example of just how little respect Trump feels for women — both those in his life and those he hopes to represent all over the United States. Bill Clinton isn't running for president right now. But Trump is. And as long as he continues to spill his hateful rhetoric from campaign stop to campaign stop, it's his words we should pay attention to and hold him accountable for.