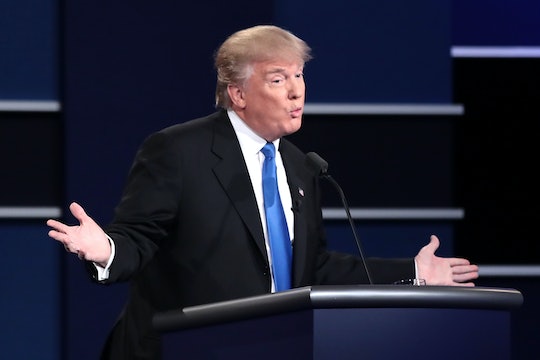 During the first presidential debate, candidate Donald Trump addressed moderator Lester Holt's question about his yet-to-be-released federal tax returns by saying he was "smart" not to pay taxes, claiming that it's essentially a waste of money. However, is admitting to tax evasion on live television a great idea when you're a presidential candidate? Trump's "That makes me smart" quote about not paying his taxes probably wasn't very smart, to say the least.

Trump claims that he hasn't released his returns because he's been under audit and his lawyers have advised him not to — but is it also possible that those returns would reveal some things that wouldn't be great for his campaign?

Although Trump suggested that if Hillary Clinton were to release the 33,000 emails she deleted from her private server, he'd release his tax returns, it's kind of apples and oranges or, as Clinton put it, a classic "bait and switch." Trump's tax returns and Clinton's emails are two of the most headlining making items in this year's election, but they are hardly the same thing.

The release of tax returns by presidential candidates is pretty standard operating procedure. And even if Trump is under audit by the IRS (even for the 15 years he claimed he has been) there's nothing that says he can't release the returns while under audit — a point that Clinton brought up during the debate. She speculated that the reason he has refused to release them is that they might include something rather damning — like tax evasion, which he might have just admitted to on live television.

Of course the media has been speculating about Trump's tax evasion for a while already, claiming that his charitable foundation has served as a front for the Trump family to avoid paying taxes for decades. But it should also be noted that, given his status as business owner, real estate developer and all-around mogul, he has every tool and opportunity available to him to ensure (as many in the 1 percent are likely to do) that his tax burden is practically nothing.

What's even more unfathomable is that it's actually totally legal for him to do that, as long as there's proof that he did pay income tax where it was required. All the finagling by attorneys, if done correctly, is legal if not a privilege of the extremely wealthy. If Trump were to release his returns and show proof that his tax strategy was by the books, albeit by the very long and off-limits to most of us books, he wouldn't be guilty of tax fraud. If, however, he has not been paying tax on income knowingly, and his attorneys and financial advisors have been helping him do it, than that could be a scandal. Of course, there is nothing to support this, and only time will tell where this conversation will go.