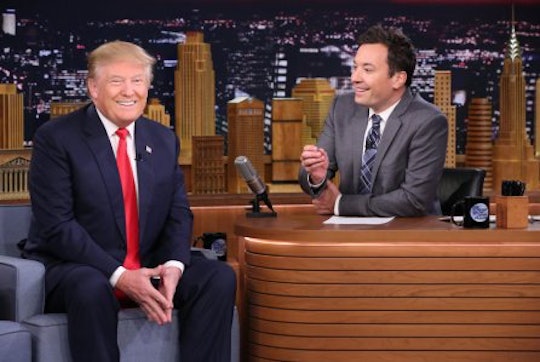 Donald Trump's 'Tonight Show' Visit Was All About Hillary Clinton

Republican Presidential candidate Donald Trump talked all about Hillary Clinton on The Tonight Show With Jimmy Fallon Monday night. Of course, he talked about himself, but mostly about Hillary. And not in the nicest way, either.

Here's the thing about Trump that makes it difficult for many people to see him as a serious option to hold the highest office in the country: it's like a game to him. He told Fallon:

He's talking about Hillary Clinton's comments last week that Donald has a "penchant for sexism," and his subsequent comments about her husband former President Bill Clinton. He also mentioned Benghazi, her emails, and how she's faring against Bernie Sanders.

Doesn't that sound like something from a high school gym locker room? Is this a bad plotline from season two of Friday Night Lights? It sounds like there's "beef." There shouldn't be beef. There should be a real (or civil, at least. I know I'm dreaming) discussion about the ideas different people have about how to run a country.

Donald is all about the made up battle he's having with other candidates in his head, whether you agree with his "politics" or not. He carried on with his me against Hillary rant saying that at the end of the day, their celebrity would at least bring people out to vote:

That's a good thing, because people don't vote that much in this country. So that would be an amazing thing if that happened.

Of course, it wasn't all about Clinton. There was one joke about what he'd do with the Powerball billions. But just pulling out that he would "give it to the vets" (which he also said about hypothetical earnings from his debate appearances) sounds a little disingenuous, seeing as he and his foundation do not currently donate all that much to veterans or veterans' services.

Social media was torn about his appearance:

He laughed off Fallon's mention of the conspiracy that the Democratic party hired him so that Hillary would win. Even that's not laughable anymore It's just scary that their conspiracy might have backfired. Or that in reality, Trump could actually be president of the United States.

As the Iowa Caucus approaches, things are starting to get a little serious. So we can expect The Donald's attacks and rantings to get a little louder, a little more offensive, all pointed straight at Hillary Clinton.

Like he said, they haven't even gotten started yet. Which means there is only so much you can do to cope.