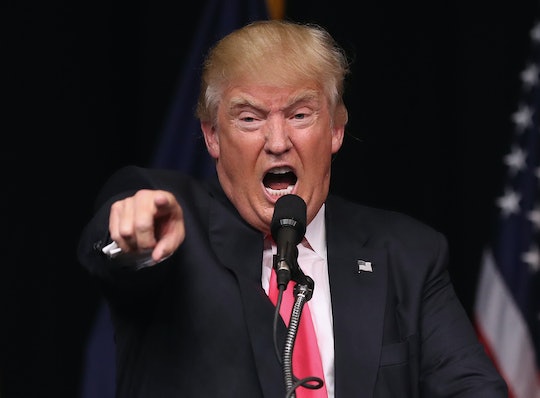 On Thursday night, Hillary Clinton delivered a historic acceptance speech at the Democratic National Convention, making her the first-ever female nominated for president by a major party. The next morning, on the Twitter account that he loves so dearly, Republican nominee Donald Trump called the speech a "very average scream." Donald Trump's "scream" tweet responded to a glass-ceiling shattering event with misogyny, showing that he'll never turn away from sexist tropes.

Throughout her campaign, Clinton has been dogged by criticism that, when she talks, she "shouts." Her male competitors, from Bernie Sanders to Trump himself, have spoken just as loudly, or perhaps even louder, and yet somehow they've managed to escape such charges. The idea of "screaming" or "shouting" carries with it an implicit rebuke — the shouter should learn to control herself. No one wants to listen to that kind of noise. If what she had to say was worthwhile, she wouldn't have to yell about it.

The denigrating of women's voices in order to silence them is a long tradition going all the way back to ancient Rome, as Jordan Kisner documented in a recent story for The Cut. And the Republican presidential nominee seems perfectly content to carry on that tradition, as he demonstrated on Friday morning:

For men of Trump's ilk, women are supposed to speak in sweet, pleasing tones or, better yet, not speak at all. After all, part of the reason he dumped his first wife, Ivana, is because she wanted to talk about business, and it bored him. Clinton's speech, which highlighted her long record of public service while calling for unity, optimism, and hard work, was well-received by many, but there would have been plenty of ways for Trump to criticize it without meeting the enormous historical significance of the event with an example of the same institutionalized sexism that has long ensured that only men could reach the highest office in the country.

Trump's response isn't surprising, though. After all, this is the man who has called women "bimbos," "fat pigs," and worse. And though he's been widely called out on it, he has not demonstrated the interest, time, or decency to try and learn from his mistakes. A man who gleefully disrespects an entire half of the United States population does not deserve to be president.

Clinton, for her part, had the perfect response to Trump's latest offense all the way back in October, when others accused her of "shouting" about gun control. "First of all, I'm not shouting," she said. "It's just when women talk, some people think we're shouting."

So, to reiterate the sentiment that many have already expressed to Trump, delete your account. And while you're at it, delete your candidacy.