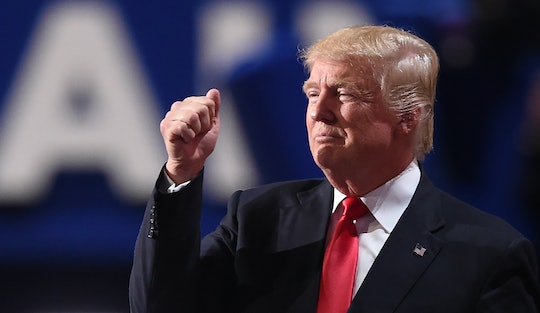 Of all the tasks the president-elect could be addressing in the months before inauguration, he's instead opting for a little more celebration. Donald Trump's "victory tour" will reportedly visit the states that voted for him, giving the cold shoulder to any of those that went to rival Hillary Clinton. The Trump campaign's advance team director, George Gigicos, explained that the team is "working on a victory tour now," one that "will happen in the next couple of weeks," after Thanksgiving.

Kellyanne Conway, Trump's campaign manager, attempted to correct Gigicos in his description of the events, clarifying that it was a "'Thank you tour.' It’s not a 'victory tour,'" before finally dubbing it a "Thank America tour." Perhaps attempting to ride on the wave of his presidential win, Trump may be looking to keep excitement alive among his supporters. Trump rallies nationwide fueled his presidential campaign, invigorating loyalty within voters while delivering an abrasive message; Some of Trump's most memorable quotes were spoken at his rallies, including inflammatory statements such as: "I could stand in the middle of 5th Avenue and shoot somebody and I wouldn't lose voters," as well as " look at my African-American over here!"

In the days immediately following his election, Trump's aids already had alluded to this tour, noting that Trump maintained his "interest in continuing to hold the large rallies that were a staple of his candidacy." Christopher Ruddy, chief executive of the conservative website Newsmax Media, explained: "I think Trump has discovered that these rallies are tremendous opportunities for him to get his message out."

A Trump victory tour will surely have an impassioned share of fans and protestors alike. As anti-Trump protests continue nationwide, a Trump tour is an obvious target for opposing parties to voice upset and outrage. President Obama even encouraged the protests on Thursday night, saying: "I would not advise people who feel strongly or who are concerned about some of the issues that have been raised during the course of the campaign."

Whereas Trump's victory tour has the wishes of his supporters in mind, they'll likely get a bit more than they bargained for; The president-elect can't drown out the opposition forever.