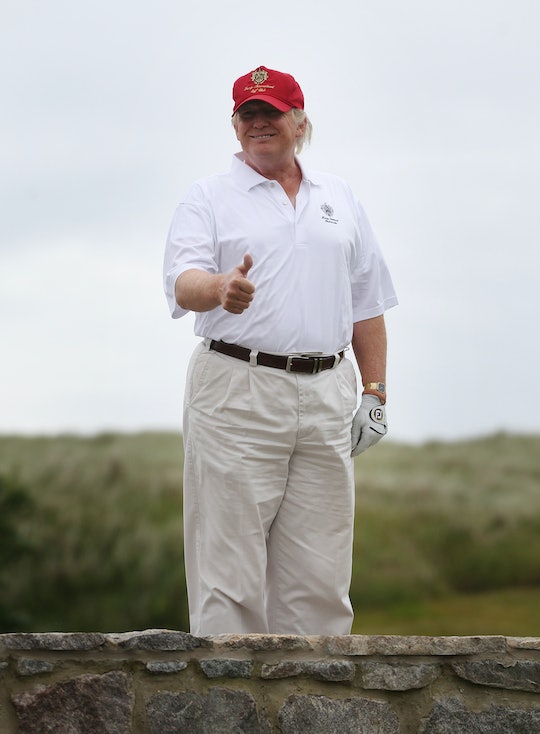 There are many, many layers to Donald Trump. The Republican presidential nominee (assuming he makes it through the convention) has a head so yuge that he manages to fit all sorts of ideas in there, even ones that don't make sense or seem to be able to logically coexist. Trump's views on climate change, for example, demonstrate perfectly his skill at believing in two contradictory ideas simultaneously.

Trump has long said, in public, that climate change was pseudo-science. Once, in 2012, he tweeted that the "concept of global warming was created by and for the Chinese in order to make U.S. manufacturing non-competitive." Whether you believe in science or not, you have to admit that that is an insane conspiracy theory. He's since distanced himself from that remark specifically, but he has also called climate change complete "bullshit." Those are some pretty strong words.

But! The story is more complicated than that. Politico reported this week that Trump has applied to build a sea wall at one of his gold resorts in Ireland, the Trump International Golf Links & Hotel, in Country Clare. On the permit, Trump specifically lists global warming and its effects, namely increased erosion due to rising sea levels, as the reason he needs a wall. (This guy really loves building walls.)

It looks like someone is full of it. Applying for a permit for one of his resorts (and I'm sure he'll say he had no idea it was even happening, but then what kind of manager would that make him? The web of hypocrisies grows...) means that Trump definitely believes in global warming on some level, even if he doesn't seem to understand that global "warming" doesn't mean it has to be hot all the time. So he's basically playing America, or at least his supporters, when he stands up in front of crowds and says that the Chinese made the whole thing up because they want our jobs (or something).

Will this flip flopping around on a major issue matter to his supporters? Probably not. There are so many other absurd and illogical things about his platforms that this discrepancy between what he says and what he does will probably leave him unscathed.

But seriously, I don't know what's better. Trump building a sea wall to protect his golf course from erosion due to global warming or Trump calling reporters pretending to be his own publicist. It's a real toss-up.

It's totally out of control that voters just seem to take whatever Trump says as truth, even though he is continuously revealed as a liar, liar, pants on fire. Worse than that, he's misinforming the public about one of the most important issues of our lifetime. You can't make this stuff up.