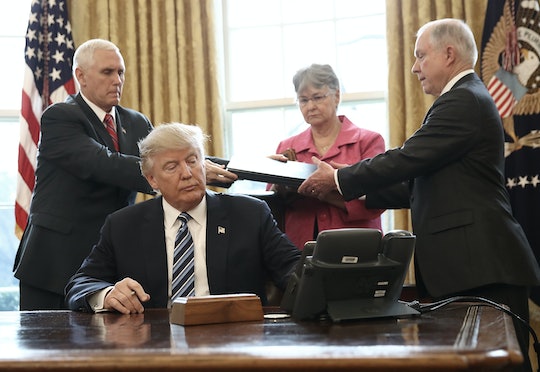 Things just keep getting weirder and weirder in the White House. After nearly two years (can you believe?) of a tumultuous, inconsistent presidency, one of President Donald Trump's least-loyal staffers is finally speaking out. In an op-ed published in The New York Times Wednesday afternoon, someone claiming to be a senior White House official revealed themselves to be "part of the resistance inside the Trump administration." The piece quickly went viral, with endless people posting on social media about what it means and who might be behind it. The newspaper is keeping the staff member's identity under wraps, so now seems like a good time to review the advisers and officials who make up Donald Trump’s senior White House staff.

The anonymous writer of the opinion piece, which is titled "I Am Part of the Resistance Inside the Trump Administration," claims that "many of the senior officials in [Trump's] own administration are working diligently from within to frustrate parts of his agenda and his worst inclinations." Additionally, the author wrote that they (and the other senior officials in question) are working to "preserve our democratic institutions while thwarting Mr. Trump’s more misguided impulses until he is out of office."

If everything the author claimed is true, then their identity doesn't really matter, because it means multiple senior officials are part of this resistance. Not to mention, any staffer who denies being the author may still be one of the "many senior officials" who are working to "frustrate" Trump's agenda.

But still, many people have shared their theories and questions regarding the anonymous staffer on Twitter.

So even though America may never know who is involved here, here is a list of Trump's senior staffers, just as a refresher.

Kellyanne Conway is Trump's former campaign manager and current Counselor to the President. In an interview with Fox News Wednesday night, Conway said, according to Mediaite:

I just have to correct the record. It’s not clear to us anyway that it’s somebody in the White House. It says ‘senior administration official,’ that could be many people. There are I think thousands of political appointees, hundreds of folks that would qualify under that title alone.

Mike Pompeo, currently serving as the U.S. Secretary of State, has already denied that he is behind the piece, according to the Associated Press.

“Speculation that The New York Times op-ed was written by me or my Principal Deputy is patently false. We did not,” Director of National Intelligence Dan Coats said in a statement, The Hill reported. “From the beginning of our tenure, we have insisted that the entire [intelligence community] remain focused on our mission to provide the President and policymakers with the best intelligence possible.”

Early Thursday morning, Vice President Mike Pence's Chief of Staff Jarrod Agen tweeted that the V.P. did not write the piece, CBS News reported. This followed speculation about the essay's use of the unique word "lodestar," which Pence (or perhaps his staff and speech writers) uses frequently in public speaking engagements and statements, CNBC reported.

Jared Kushner is the son-in-law of and senior advisor to the president. He likes maintaining a low profile, because when he speaks in public, memes happen.

Like her husband, Trump's daughter also serves as a senior advisor to the president. Ivanka Trump has attempted to criticize a few of her father's policies in the past; namely, regarding family border separation according to USA Today.

Jeff Sessions, the Attorney General of the United States, is a prominent member of Trump's administration. And as CNN pointed out, "Sessions sticks out as a possibility for a simple reason: He's got motive. No one has been more publicly maligned by Trump than his attorney general."

United States Secretary of the Treasury Steven Mnuchin doesn't seem to have much to say about the op-ed, considering the above tweet, which he posted Thursday morning.

John F. Kelly is Trump's Chief of Staff, meaning he works with Trump very closely and often. Comments Trump made in October 2017 about Kelly's son, who died in combat, caused a lot of controversy, Newsweek reported.

As the former Deputy White House Chief of Staff, Kirstjen Nielsen worked pretty closely with the president. She currently serves as the United States Secretary of Homeland Security, and she is known as the "face" of the cruel family border separation crisis, according to Politico.

In a statement Wednesday evening, White House Press Secretary Sarah Sanders called the op-ed "pathetic, reckless, and selfish." Interestingly, she referred to the anonymous author as a "he," before calling for him to resign.

At just 27 years old, Madeleine Westerhout is Trump's personal secretary and scheduler. In his conversation with Woodward, Trump explained that Westerhout is the only way to contact him. “Did you speak to Madeleine? ... Madeleine is the key,” Trump told Woodward, according to The National Post. “She’s the secret."

Even though The New York Times seems dedicated to keeping the author's identity a secret ("We believe publishing this essay anonymously is the only way to deliver an important perspective to our readers," the newspaper wrote), Trump is determined to identify the "GUTLESS" person behind it.

As much as I'd like to know who wrote the op-ed, perhaps leaving their identity a secret will be what helps their resistance grow.