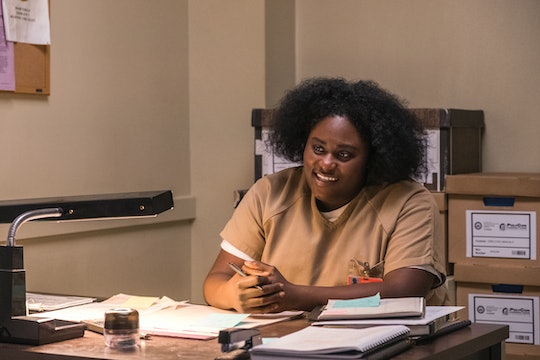 The series finale of Orange is the New Black paid homage to one of its most beloved characters by giving fans a way to make a real-world difference. Poussey Washington, portrayed by actress Samira Wiley, was unjustly killed by a CO at the end of Season 4, and her death was a reminder of the real-life circumstances that incarcerated women face everyday. You can now donate to the Poussey Washington Fund set-up by Taystee in the Orange is the New Black finale, and help people impacted by the criminal justice system.

From the very beginning, Orange is the New Black addressed issues women face in prison, highlighting the injustices they are forced to deal with. Now that it’s ending, showrunners are bringing the series' spirit to life with the Poussey Washington Fund. As described on its Crowdrise website, the fund was created to support organizations that work to rethink, revise and reform justice in America.

“Poussey Washington may have been a fictional character created for television, but her life’s story and devastating fate is all too real for many women in this country,” the website reads. “The Poussey Washington Fund will support eight preexisting non-profits to benefit organizations focused on social issues surrounding criminal justice and policy reform, immigrants’ rights and helping those affected by mass incarceration.”

When you donate to the fund, your contribution will help support eight organizations — A New Way of Life, Anti Recidivism Coalition, College Community Fellowship, Freedom For Immigrants, Immigrant Defenders Law Center, National Council for the Incarcerated and Formerly Incarcerated Woman and Girl, unPrison Project, and the Women’s Prison Association — all working to help real-life people dealing with issues you may have seen depicted on the show.

Netflix announced the project on Jul. 25 after tweeting a video of the cast surprising fans of the show. One fan talked about how the series finally gave her queer TV characters she could relate to. Another said Daya’s relationship with her mom reflected how she felt growing up with incarcerated parents. And one woman revealed the show inspired her to go back to school to get her bachelor’s degree in criminal justice.

“We have seen how Orange Is the New Black has impacted you and people all over the world,” Samira Wiley says at the end of the video. “Now, we want to continue that impact long after the show is over by launching the Poussey Washington Fund — We've been honored to tell these stories of these characters, and we've learned first-hand that the system is failing women, both inside and outside of prison walls. So the Poussey Washington Fund will help all of us keep the Orange legacy living on, far after the show is over.”

Sure, the show is fictional, but the pain and suffering of incarceration is all too real. So, while Taystee honors the memory of her best friend by helping others, fans can carry that good will into the real-world and provide hope to people who need it.