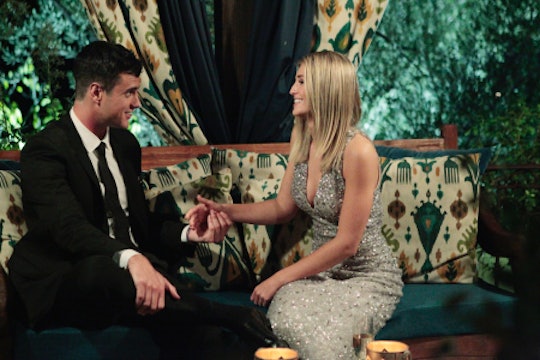 On this week's episode of The Bachelor, the girls entered into middle school levels of drama. Which is to say, there was a lot of drama. And while there are lots of tenacious contestants chasing Ben, the girls ganged up on the most aggressive of them all by making fun of Olivia's toes. Since she's gotten the rose a few times in group dates and has a knack for whisking Ben away to one of the hotel rooms every chance she gets, the girls are getting a little jealous of the possible front-runner. But whatever you do — and however badly you want to find out — don't go and Google Olivia's toes to see for yourself... because you're really just playing along with the girls' bullying at that point.

Last night's antics came to a head with Jami telling Olivia in a private moment that the girls were making fun of her feet. Olivia, for her part, was actually a very good sport about it. While Amber was trying to just get it out, Olivia was left guessing another handful of body parts that she was sensitive about, which the girls could be targeting in their mean-spiritedness. "My calves," she guessed. "Cankles?"

Olivia's eyes widened like yours probably did the first time you realized you were being left out for something silly in the 4th grade (just me?). Luckily, she was a great sport about it and handled the criticism with class. And whether you love Olivia or not, her response was something every human should just start repeating to themselves in the mirror.

Good for her. She is just this close to crazy when it comes to thinking Ben is speaking to her every time he blinks, but you have to hand it to her for confidence. And a sense of humor. On Tuesday, Olivia even tweeted about her bad feet, posting a photo of some truly hairy hobbit feet and joking, "People are asking what my toes look like so I thought I'd just take a quick pic for y'all." (Nice one, girl.)

Meanwhile, images of similarly gross, hairy feet have been circulating Twitter all day, with many criticizing Olivia's later move (complaining to Ben about her "fat toes" rather than comforting over a recent family tragedy) as well:

Unfortunately for Twitter, no one actually ever got to see her tootsies. But maybe that's for the best. While the rest of the Bachelor crew get swept up in mean-spiritedness and catty behavior, audiences everywhere can at least feel good about the fact that they're not engaging in it as well.

Let's just hope, for everyone's sake, that it was the booze that caused the roller coaster of emotions over fat toes, because really, only too much white wine can really explain how silly everyone looked.