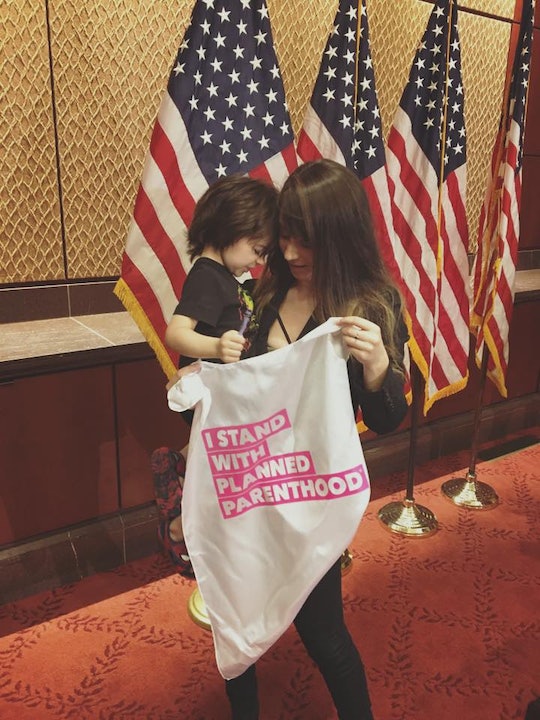 Don't Tell Me Happy Mother's Day Until You Do This

"Happy Mother's Day!" a friendly Facebook user posts, and while I appreciate the sentiment I can't help but roll my eyes. In fact, it becomes increasingly difficult to curb my inner rage when I scroll past endless comments, memes, and photos all proclaiming the beauty, value, and strength of moms the world over. Because while I don't disagree — as a mom myself and as someone who was raised by an incredible mother, I believe moms are beautiful, important, and strength personified — I am also unable to ignore how our country systematically fails mothers. So, please, don't wish me a hallow Happy Mother's Day if you're not willing to change a system that leaves far too many moms behind.

The United States has the worst rate of maternal deaths in the developed world, according to a six-month long investigation by NPR and ProPublica. Not only do more women die of pregnancy-related complications than any developed country, but the rate of pregnancy-related deaths has been increasing. So when my partner asks me what I want for Mother's Day, a card pontificating about the self-sacrifices moms make seems... lacking. In fact, an entire day that encourages us all to celebrate moms, while we do nothing to actually support them the other 364 days a year, seems more like an affront than a "gift."

I would give up my Mother's Day treats entirely, in fact, if our country made just a few, concrete and long-lasting changes. Changes that we should all be fighting and advocating for. Changes that should be reflected in the platforms of our elected officials.

I don't want an hour at a spa, I want mandatory paid family leave. According to Politifact, the United States is the only industrialized nation without mandatory paid family leave. Currently, the Family Medical Leave Act guarantees women 12 weeks job-protected unpaid leave but, according to a 2017 report from USA Today, "millions of Americans aren't offered a single day off work following the birth or adoption of a child." According to PL+US, one in four new moms will go back to work an astounding 10 days after they give birth. According to a new survey from the March of Dimes, 90 percent of moms agree that "immediate improvement to maternity/paternal leave is needed, and 86 percent say current policies make life harder on new moms and babies."

I don't want to sit through an expensive brunch, I want LGBTQ couples to be afforded the chance to adopt and raise a child. On Feb. 26, 2018, the Georgia Senate passed a measure that allows adoption agencies the right to refuse to work with LGBTQ couples, and according to the ACLU — and despite having more than 13,000 children in the state's foster care system — the Michigan Department of Health and Human Services allows child placement agencies to "turn away prospective foster and adoptive families headed by same-sex couples based on religious objections." Less than 24 hours after President Donald Trump signed his "religious liberty" executive order, Oklahoma and Kansas legislatures passed bills that would also allow adoption agencies to discriminate based on a couples' sexual orientation.

So I really don't want to hear about how beautiful it is for someone to choose to be a parent, unless you're actively working to make sure everyone who is ready, willing, and able to become a mom gets the chance to be.

I don't want to take a "time out" for myself, I want politics out of doctor's offices so women with unplanned pregnancies aren't forced into motherhood due to anti-abortion laws and unnecessary abortion care restrictions. In 2017, 19 states enacted 63 new restrictions on abortions rights and access. According to the Guttmacher Institute, that's the largest number of abortion restrictions since 2013. Most recently, Iowa passed a six-week abortion ban; a restriction that prohibits abortion at a gestational age in which most women don't even know they're pregnant yet. According to a Jan. 2018 study reported in the American Journal of Public Health, women who are denied access to abortion services are four times more likely to live below the federal poverty line than women who can procure those same services. The same study found that three-quarters of women seeking abortion services didn't have enough money to cover the cost of housing, transportation, and food, and over 63 percent already had one child at home, and, at a time when 27 states have mandatory waiting periods, 35 states require mandatory counseling, while a quarter of abortion clinics in the United States have closed in the last five years. Due to unnecessary restrictions, women are being forced into motherhood due to a lack of resources. So if you want to talk about how magical motherhood is, make sure it remains the choice and not a byproduct of overreaching legislation. Champion motherhood as a decision, and not a "consequence."

A reported 92 percent of moms agree that Mother's Day should be about supporting moms, not just about gifts.

I don't want to be gifted with some extravagant piece of jewelry, I want equal pay for equal work and universal child care. Currently, women working full time in the United States typically are paid just 80 percent of what men earn, according to the American Association of University Women (AAUW). And working moms are paid 71 cents to every dollar working dads make, according to a 2017 report from the Chicago Tribune. A 2016 joint report from New America and Care.com revealed that the average yearly cost of full-time child care is an unbelievable $9,589 a year, and according to the Census Bureau the average "weekly child care expenses for working moms with kids under 15 have shot up 70 percent between 1985 and 2011." A reported 69 percent of black moms are less likely to believe that their employers are understanding of their family needs, compared to 86 percent of employed white moms. Our country has made it next to impossible for working mothers to obtain a living wage while simultaneously paying for child care that affords them the opportunity to work.

I want black mothers to stop dying in childbirth at three times the rate of white mothers. Nearly nine in 10 moms believe that maternal and child health care needs immediate improvement in the United States, and 68 percent say access to affordable health care is among the most important needs for new moms. I want to say, confidently, that pregnant women are viewed as capable, autonomous human beings in this country, who should be afforded reasonable accommodations at work, as is the law. But between Oct 2010 and Sept 2015, 31,000 charges of pregnancy discrimination were filed with the U.S. Equal Employment Opportunity Commission (EEOC), so that day has yet to arrive. I want people to stop shaming breastfeeding mothers for feeding their children in public without a cover, and to stop judging formula-feeding mothers for either making a necessary change in their infant feeding plan, or simply deciding they didn't want to use their body to sustain another human being. I want people to continue to care for mothers after their babies are born, so we can better treat the 1 in 7 women who suffer from postpartum depression.

I want our government to stop attacking essential programs, like the Supplemental Nutrition Assistance Program (SNAP) — an anti-hunger program that, according to the National Women's Law Center, kept 8.4 million people, including nearly 4 million children, above the poverty line in 2015. A reported 44 million low-income individuals and families receive SNAP benefits, and many are women or women-led households who rely on this resource to escape poverty. Women with access to SNAP are significantly more likely to complete their education, be employed and have higher earnings and financial success, and they are 34 percent more likely to report good health. The Trump administration wants to cut nearly $213 billion from the program over the next 10 years.

I want the lip service this country pays mothers to end, and actual, sustainable support to officially start. And I'm not alone, a reported 92 percent of moms agree that Mother's Day should be about supporting moms, not just about gifts.

Do I think we should all stop saying "Happy Mother's Day" entirely? No, of course not. This doesn't have to be one of those "I say 'Happy Holidays' and you emphatically yell about me taking away your ability to say 'Merry Christmas' whenever you want" type situations. By all means, yell "Happy Mother's Day" from the rooftops! Shower your mother with gifts! Take the kids so your partner can relax! Write all the cute Mother's Day cards!

Just, please, don't let your admiration for mothers stop there. Those who make the life choice to carry, birth, and raise human life deserve constant, unyielding support. Motherhood is such an awesome responsibility, so we must make sure it remains a life choice and not a "consequence of one's actions" or the ramifications of anti-abortion laws. Pregnancy can be life-threatening, so we need to start believing women when they say they're in pain and offer adequate, affordable prenatal and postnatal care and enough time to recover from childbirth.

The mothers of this country deserve more than one day a year of faux support. Until that happens, you can keep those bottomless mimosa brunches to yourself.