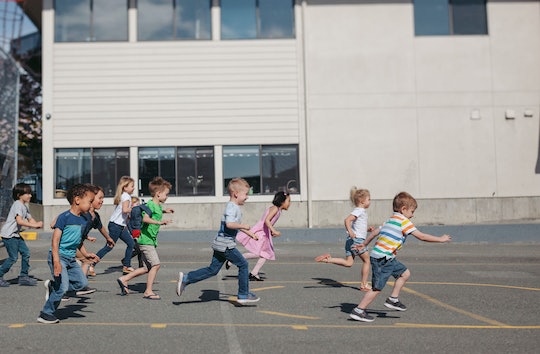 "Don't Look Back": On Sending My Son Off To School

We pull into the school parking lot around 7:45 a.m. My third grader is ready to jump out as soon as the car stops. He’s agreed that I can give him a “secret kiss” behind the car door but has not agreed that he needs a sweatshirt. He’s shoved it in his backpack but as he walks towards the gates I call to him to put it on and have a great day. He ignores me.

My first grader is still buckled into his booster seat. “Ready?” He grabs my hand and we walk through the parking lot and up the stairs. He tells me about how he is excited for his gym class. Then he remembers a dream he had about eating pizza at the beach. Then he asks if we have anything to do after school.

We arrive at his classroom and sit on the benches that look out on the playground. Boys and girls play chase and tetherball, and whisper their school grade secrets.

“Why don’t you go chase Luke?” I ask. “It looks like he wants you to.” He considers it for a moment.

“No thanks. I don’t play before school.”

“I just don’t,” he says ending the conversation. My son is well adjusted, makes friends easily and by all accounts, is well liked. But he’s never been one to just follow the crowd. I admire this about him.

This is a new school for us so I walk with him to his classroom to make sure he feels comfortable and safe. I could just drop him and his brother off like many of the other parents. But the ten minutes before school –– seated between the world we share and the one that is all his own –– are some of my favorites.

When the warning bell rings, his class lines up. My son looks at me with eyes that say Don’t go yet. I say, “I’ll wait until Mrs. S comes out.” His face warms into a smile. When his teacher opens the door, I give him a hug and walk away. I turn around and wave as he walks into the classroom. He waves back.

It’s October now. We’re wearing vests but I’m still cold. My son crawls onto my lap to try to keep warm. “At lunchtime, it will be hot again,” he says. I don’t know if he is trying to remind me or himself. We talk about when we’ll get pumpkins, when we’ll carve them and where we will trick or treat. The first bell rings and the class lines up.

Maybe I walk him in because I still have a window into his other world and know that someday I won’t.

I give him a hug and walk into the crowd of parents, teachers and kids scurrying to start their days. When I’m certain he won’t see, I look back. I watch him for the minute or two before the teacher opens the door — he’s talking and laughing with friends. He’s in the world now where I am just a visitor.

This has become our new routine. I stay with him until enough friends arrive. Then he tells me to go but “don’t look back.”

On this morning though, after I’ve snuck my look back and start walking to the gate, I hear, “Wait, Mom!” Even in a sea of moms, I know I am the one being called.

My son has tears in his eyes. “Don’t go yet. Mrs. S needs a few minutes so she said we could have a 10-minute recess.”

He jumps into my arms and buries his head in my shoulder. His little boy limbs hang awkwardly.

“Extra recess is no reason to cry.” He clings to me more tightly and I know he has moved beyond reasoning. I remember the time I was a little late for pick up and he crumbled; the time the bus had to take an alternate route because of snow and he came home in tears; at the museum when he was with his papa and got upset because he couldn’t find me. “It’s just a little change to the routine. It’s going to be fine.” We slowly walk back to his classroom where the teacher ushers him in with a gentle hug.

That afternoon I ask, “How did it the rest of the morning go?”

“Great! We painted and played kickball!”

“And were you still upset for a while or did you feel better quickly?”

“Upset?” It's as though he barely remembers. “Oh. No, I was fine right away.”

I feel relieved and sad, like at the end of an unforgettable and exhausting vacation.

Instead, I wrestle with the gnawing feeling that maybe I've been walking him to his classroom not because that’s what he needs, but because it’s what I need.

A few weeks later, my son tells me that his friend’s mother drops him off in the drop-off lane. “He walks all the way to our classroom alone.” I sense the curiosity in my son’s statement.

“Maybe we should try that tomorrow. I could drop you off and you could walk up with your brother?”

He looks at me and pauses for a long time. “OK, but let’s wait until next week or something.”

It’s December now and we’re a little late for school. His brother has been sick and getting most of my attention. The line in front of the school is too long so we pull up to the back gate. He gives me his “this isn’t our routine look.” I ignore it, smile and say, “It’s cold out so if we walk really quickly, we’ll stay warm.” We hear the first bell as we shut the car door. His eyes well a bit but he takes my hand and says, “let’s run.” We make it to his classroom just as his classmates are walking in. He gives me a hug and hurries to the end of the line.

I walk away but turn to look back, and see the closed door and how far we’ve come.