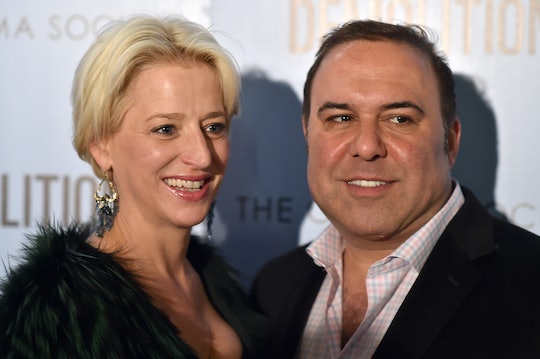 Significant others can cause major issues on any leg of the Real Housewives franchise (Slade Smiley, anyone?) and in Real Housewives of New York eighth season, the fighting starts again, this time over Dorinda Medley's boyfriend John Mahdessian. It turns out no one seems to like John very much, but the most vocal is certainly Bethenny — and she's quickly backed up by one of Dorinda's oldest friends, Ramona. That's what really sets Dorinda off, culminating in an episode-ending argument that promises to sprawl over to next week (if not the entire season). Dorinda Medley's boyfriend creates drama, and that drama doesn't look like it's going to end any time soon.

The premiere episode of Season 8 gave hints at trouble to come. While at lunch with Dorinda and John (as well as Julianne and her husband), Bethenny could barely contain her distaste for John, even referring to him as a "chubby baby" in the talking head. It ramps up in Wednesday's episode, "An Intimates Affair," in which Bethenny brings her concerns directly to Dorinda. Spoiler alert: it doesn't go very well. In usual Real Housewives fashion, that little spark blows up into raging fire. Bethenny's problem is that Dorinda is always "selling" John to them – and Bethenny's not buying.

Bethenny's issues with John are many, chief among them that he seems like a "salesman" and that he's approached her in the past trying to sell her ideas. She doesn't like how John presents himself (and she really doesn't like that Dorinda Nairs his back for him, but nobody could really blame her for that). Dorinda is understandably not pleased to hear her relationship criticized, but the argument is taken to another level when Ramona decides to support Bethenny's position.

Ramona relates a pretty scandalous friend-of-a-friend story that involved pals of hers overhearing John allegedly saying some unsavory things to a crowd about popping Viagra and spending the night with Dorinda. The fact that Ramona chose to share this story in front of Dorinda's whole party was probably not the best move, and Dorinda blows up. Can you blame her?

Dorinda's angry rant produces some pretty choice lines, including telling Bethenny, "You're not the word according to God! You're not gospel!" She's definitely defensive over her relationship, probably because she has to defend it so often. Ramona hurts her specifically because she's seen everything Dorinda has gone through over the years (including losing a husband) and still embarrassed her in front of everyone. It's a sticky situation all around and one that will likely have season-long effects.

Next week the fight continues with John himself making an appearance at the party — and the fallout from that is definitely something everyone's going to want to see.