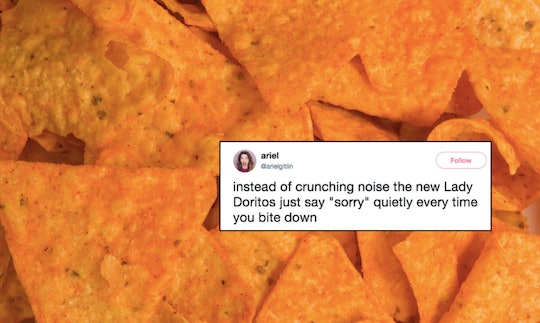 It's tough to be a woman, am I right? Old men in Congress are constantly trying to yank away reproductive freedoms, and also, apparently, Doritos crunch too loudly for little lady mouths! Now, it turns out that Doritos is making chips specifically for women, as TIME reported, providing a "solution" to a "problem" that the majority of women were not aware existed. Needless to say, the internet is rightfully confused about this news.

UPDATE: In a statement, PepsiCo told Romper, "The reporting on a specific Doritos product for female consumers is inaccurate. We already have Doritos for women – they’re called Doritos, and they’re enjoyed by millions of people every day." The statement continued:

At the same time, we know needs and preferences continue to evolve and we’re always looking for new ways to engage and delight our consumers.

EARLIER: In a recent "Freakanomics Radio" interview, PepsiCo C.E.O. Indra Nooyi revealed that the company had noticed some differences between men and women in terms of chip consumption. She said:

But now, according to Nooyi, Doritos is looking into snacks for women that can be "designed and packaged differently," with plans to launch "a bunch" of those products soon. And what are the most important elements of a lady chip? Nooyi said in the same interview:

For women, low-crunch, the full taste profile, not have so much of the flavor stick on the fingers, and how can you put it in a purse? Because women love to carry a snack in their purse.

First of all, I'm skeptical about this whole claim that women and girls are afraid to eat Doritos with glee, given how whole-heartedly and ravenously my female friends and I have chowed down on them over the years. But if it's true that women are afraid to get Dorito dust on their fingers, then wouldn't it be better to try to change that attitude with, say, a marketing campaign in which ladies tear into a bunch of Doritos, instead of trying to make money by enforcing this patriarchal nonsense that women should be dainty, and their snacks should be too?

Upon hearing the news about the great crunch crisis, plenty of women took to Twitter to voice their opposition to the concept of "Lady Doritos," pointing out that there are so many other important issues that women are focusing on right now. You know, like the whole #MeToo movement, or equal pay for equal work.

After this backlash, I wouldn't be surprised if Doritos back-peddled a bit on "women-friendly" chips. Thank goodness for the internet, which is always ready with the perfect amount of snark for this kind of situation.

And now, excuse me. I've suddenly had a hankering to go out and rip into a bag of Doritos, crunching them deafeningly between my teeth like the proper lady I am.