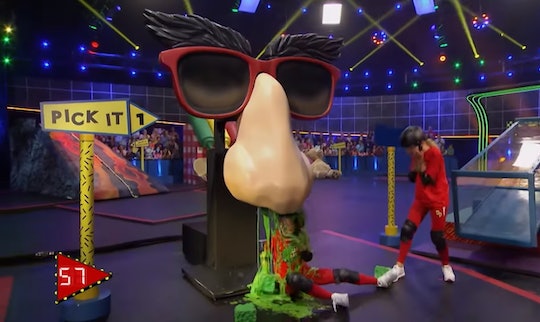 Your Childhood Dream Is About To Come True: 'Double Dare' Is Going On Tour

When you were young, did you ever daydream about going on TV with your sibling or best friend to answer trivia questions, wade through vats of slime, and win amazing prizes? Well, you're out of luck, because you grew up, but if you're not averse to living vicariously through your own children, then have I got a consolation prize for you. Double Dare is going on tour across the country starting this fall, so you and your family will have the chance to not only attend a live show, but possibly even get selected to appear as contestants!

If you haven't seen the rebooted show on Nickelodeon yet, you'll be happy to learn that despite a few modern updates, the physical challenges remain nearly identical to the originals. Unfortunately, though, the prizes have received a major overhaul, so if you were still pining away for a boombox or a cordless phone, it's time to kiss that dream goodbye forever. However, since you're an adult with your own money now, you can buy yourself a gently used Franklin Word Wiz on Amazon for just $25, and let your kids keep any potential prizes you win on the show. It's really more about the glory, anyway, right?

Another notable difference between the rebooted Double Dare and the original show is the cast. The 1986 series was hosted by Marc Summers, while the current host is showbiz unicorn Liza Koshy, who successfully parlayed her Vine stardom into film and TV roles. But don't worry, Nick didn't forget its roots; Summers still appears as the show's Rod Roddy, introducing physical challenges, and announcing prizes. Better still, the live touring show is a love letter to the original fans, with Summers once again hosting. He'll be joined by former stage assistant, Robin Russo.

Summers issued the following statement in a press release from the network:

Hosting the Double Dare Live tour couldn't be any more exciting, and I look forward to bringing the fun and messiness of Double Dare to audiences across the country. Doing the show again with my sidekick Robin will fulfill childhood dreams of the generation that grew up with us and introduce this classic show to the next generation.

The tour will begin in Fayetteville, North Carolina on Oct. 30, and stop by 13 more U.S. cities through November. If it's not coming to your area, though, don't give up hope, because the show's website promises that more dates will be added throughout the summer for both 2018 and 2019. Be sure to check the schedule regularly, or sign up for the Double Dave Live mailing list to receive updates.

Tickets are on sale now, and prices vary depending on the venue. Most seats cost about $30 to $50, but if you're a huge fan and have the cash to burn, considering springing for the "DD VIP Experience," which includes premium seating, a pre-show meet and greet and photo opportunity with Summers and Russo, and a souvenir laminate that you can proudly display in your home before one day passing it down to future generations. That'll run you about $100 a pop, though.

And for the ultimate experience, head back to the tour's website on Oct. 1, when registration opens for contestant applications. You can also register at the venue the day of the show, but why wait? The show will only select "two teams composed of selected audience members," so it seems likely that just four lucky attendees will have the opportunity to pick that giant nose. While teams on the TV show are usually comprised of kids, a recent episode did welcome back two original contestants to compete alongside their kids, and they're targeting the tour to adults as well as children, so this could be the moment you've waited a lifetime for.