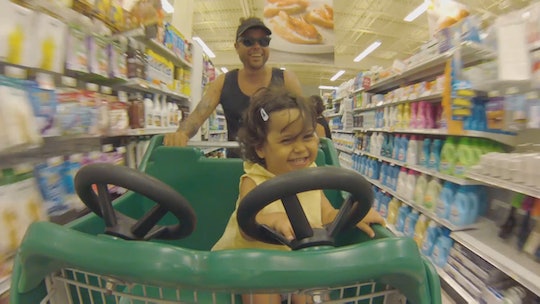 As soon as you get pregnant with your first kid, you notice that most information about parenting is written for and to moms — working moms, stay at home moms, single moms, happily married moms, moms of multiples, moms of only children. You get the idea. Despite the fact that parenting is theoretically a two-person job, the majority of parenting information targets the family matriarch. That, combined with the antiquated stereotypes surrounding fatherhood, can make it difficult for dads to find their role within the family. But Dove's #RealDad video is helping make men's role as dads, and the contributions they make to their families, more visible.

More Like This
Where To Travel With Your Kids This Summer
Rachel Zoe Shares 3 Ways To Prep Avocados For Picky Eaters
The Longest Kids Have Gone Without Washing Their Hair, According To 25 Moms
How To Celebrate Pride As A Family

The video, which is just under a minute long, features dads of various ages and backgrounds bonding with their children. These moments show a side to parenting that is rarely represented — the father's side. It shows dads feeding their children from a bottle, wearing their children in a carrier, getting them ready for bath time, and partaking in a number of activities that are typically designated for the mother. It shows them taking an active role in the parenting process.

The #RealDads video comes less than a month after Dove released it's #RealMom video, as part of a campaign for the new Baby Dove line. Though both videos drive home the fact that "there's no right way to parent," the #RealDads video seems to send a secondary message: not only should dads play a role in raising their child, but a number of them already do.

In a press release, a Dove representative explained that the concept of the video stemmed from in-house research which found that new parents often feel anxiety "due to limiting stereotypes about their roles." The research also found that dads "don't feel recognized for their role as an essential caregiver." The press release went on to say:

Research tells us that the media focuses on fathers as "providers" and "fixers" over three times more often than as "emotional caregivers" and over four times more often than a "daily caregiver" diminishing their role as parents. When in fact, 97 percent of dads say they are involved in their child(ren)’s life and 7 in 10 see themselves as highly involved.

And Dove is not alone in its findings. A 2010 study from marketing professors James Gentry and Robert Harrison found that, despite the prevalence of masculine hegemony in media, men are rarely portrayed as nurturers in commercials. In 2012, Forbes reported on research from male-focused digital entertainment company Break Media, which found that men don't feel they are correctly portrayed by the media.

As someone who has spent most of her career working for parenting publications, I can see where these thoughts stem from. Case in point: there are six print publications dedicated to "parents," but rarely do those magazines feature a dad on the cover or include articles meant specifically for dad.

As a result, Ad Age reported that more companies are featuring dads as an essential caregiver in their campaigns. And although Dove has paid attention to dads for years, (who can forget the 2014 "Call For Dad #RealDadMoments" ad?), its latest creation gives dads their proper praise.

"The Baby Dove #RealDads video is part of the brand’s effort to break down the stereotypes and anxieties new parents experience," as the Dove representative said in the press release. "The #RealDads video aims to be a celebration of new dads’ roles as caregivers and showcases how they’ve trusted their way."

Hopefully other brands will follow suite and start portraying dads in a better more accurate matter. Because, just as with moms, the contributions they make matter to their kids, their partners, and themselves.