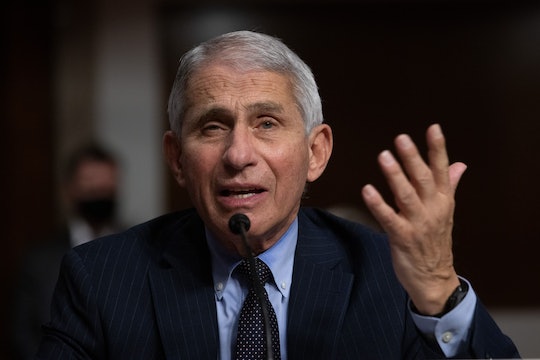 Dr. Fauci Is Here To Settle The Face Mask Debate Once & For All

National Institute of Allergy and Infectious Diseases (NIAID) Director Dr. Anthony Fauci is seeking to set the mask debate straight once and for all. After President Donald Trump claimed Fauci initially said "masks are not good" in the early days of the coronavirus pandemic, Fauci has repeatedly stressed the importance of face coverings in a series of new interviews and accused the president of taking his early stance on wearing masks out of context.

"Very early on in the pandemic… there was a shortage of PPE and masks for health care providers who needed them desperately since they were putting their lives and their safety on the line every day," Fauci said in a recent interview on ABC News' Start Here podcast. "So the feeling was that people who were wanting to have masks in the community, namely just people out in the street, might be hoarding masks and making the shortage of masks even greater. In that context, we said that we did not recommend masks."

While defending his response to the ongoing coronavirus outbreak during Tuesday's presidential debate, President Trump claimed Fauci had initially "said very strongly, 'masks are not good'" and then "changed his mind" and said they were good.

Speaking to ABC News, Fauci said that although U.S. public health officials had wanted to preserve masks for health professionals' use, a few pieces of key data caused them to re-evaluate their stance. First, Fauci said studies began to show that cloth face coverings worked as well as surgical masks for everyday use. "It became clear that cloth coverings worked as well as surgical masks, so the idea of a shortage of masks that would take it away from those who really need it was no longer there because anybody could get a mask," Fauci said.

Then research began to reveal just how much asymptomatic COVID-19 carriers were spreading the virus and contributing to the outbreak. Fauci told ABC News roughly 40-45% of all infections occurred among individuals who exhibited no symptoms. "All of a sudden, it became clear that you would not know if you were infected or if the person that you were dealing with was infected," Fauci told the news outlet. "At that point, which is now months and months ago, I have been on the airways, on the radio, on TV, begging people to wear masks," Fauci said, adding that he also advises people to keep physical distance, avoid crowds, opt for outdoor activities, and practice frequent hand washing.

"Anybody who has been listening to me over the last several months knows that a conversation does not go by where I do not strongly recommend that people wear masks," he continued.

On Wednesday, in a separate, virtual interview with WIRED's Steven Levy, Fauci described Tuesday's presidential debate as "an unusual experience" before reiterating his support of wearing masks.

"I must have said several tens of thousands of times the importance of wearing masks," he said. "So, I'm the mask guy. I don't think there's any doubt about that. So, if there was an interpretation that I'm not for masks that's a misinterpretation."