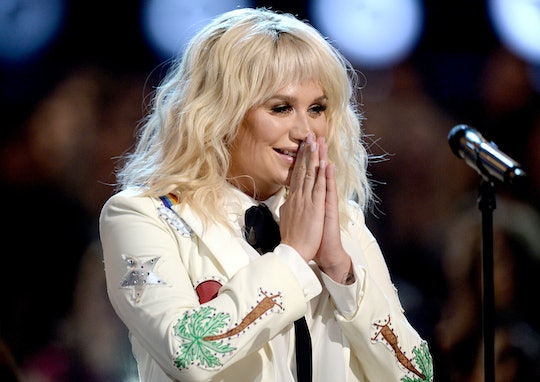 This year the media has been awash with stories of rape victims being accused of coming forward only to gain attention or sympathy, and not just in the political sphere. While denial of allegations on the part of the accused is to be expected, what's troubling is the aggressive takedown, shaming, and defamation of those who claim the abuse occurred. One such case that's received a lot of media attention over the last few years involved Kesha and her music producer, Dr. Luke, whose real name is Lukas Gottwald. Dr. Luke's lawyer responded to Kesha's New York Times profile — wherein she spoke more candidly about the situation — by not just denying the abuse occurred, but by making assumptions about Kesha's motives and making accusations of their own.

The response itself is not unexpected. Other big name celebrities have had their reps deny sexual assault claims as of late (one of whom happens to be running for president). The problem is in the tone of the response, which blatantly assumes "malicious" intent on Kesha's part and, ultimately, tries to pin the responsibility fully onto her. Not unlike how many rape victims, high profile or not, are ultimately held responsible: either through being told that they were "asking for it," that they're lying "to get attention," or to manipulate a situation (often financial) for their benefit.

The full statement by Dr. Luke was released by his lawyer, Christine Lepera, according to Stereogum: (Lepera did not immediately respond to Romper's additional request for comment.)

This article is part of a continuing coordinated press campaign by Kesha to mislead the public, mischaracterize what has transpired over the last two years, and gain unwarranted sympathy.

Kesha filed a shock and awe complaint of alleged abuse against Luke Gottwald in 2014 ― for contract negotiation leverage. It backfired.

She never intended to prove her claims. She has voluntarily withdrawn her California complaint, after having her counterclaims in New York for alleged abuse dismissed.

Nevertheless, she continues to maliciously level false accusations in the press to attack our client.

The reality is that for well over two years, Kesha chose—and it was entirely her choice—not to provide her label with any music.

Kesha was always free to move forward with her music, and an album could have been released long ago had she done so.

It was not until months after the denial of her injunction motion – for the first time in June and July 2016―that Kesha started to provide the label with music.

She provided 22 recordings created without any label consultation which were not in compliance with her contract, were in various stages of development, and which Kesha’s own team acknowledged needed work. Then, and for the last several months, the label has been in discussions with Kesha and her team to choose the best music, create additional music, and work on the tracks created.

A&R representatives of both Kemosabe and RCA have provided Kesha with detailed feedback in writing and in person on the tracks she provided to help her further develop the material. Kesha has also agreed with Kemosabe and RCA on a list of producers who will work with her on these tracks, a studio has been reserved for these sessions, and a budget for certain work provided.

The creation of an album is a process, however what has clearly been communicated is that the aim is for a release date as early as possible. It is in the economic best interest of the label and Mr. Gottwald to put out a top selling album, and that takes time. In fact, the label suggested an early release of an advance Kesha track. It was Kesha’s team who rejected this proposal.

Kesha’s claim in the article that she has no ability to earn money outside of touring is completely rebutted by well documented public court records which apparently escaped the article’s attention.

What Happened To Kesha?

During the initial deposition of the suit, Kesha denied that Dr. Luke made sexual advances toward her, but this would later be brought into question when it was revealed that he allegedly may have been using threatening tactics to keep her quiet. Dr. Luke's lawyer has maintained that the unreleased portions of the deposition would prove that Kesha's claims that Dr. Luke did, in fact, make sexual advances, were false. The tension between the singer and her label informed her next album, Warrior, which was released in 2012 — smack in the middle of the legal battle.

Dr. Luke isn't the first, nor is he likely to be the last, high-profile, powerful man to launch a smear campaign against the women who accuse him of sexual assault. The current political climate in the U.S. is rife with back-and-forths and he-said-she-saids regarding the alleged sexual assaults committed by presidential nominee Donald Trump. Trump has denied all of the allegations, often saying he doesn't know the women at all. Trump hasn't been charged with any crime. Trump's campaign has not responded to Romper's requests for comment.

If a powerful person is accused of a crime, especially a sexual crime, we would expect that they would deny it. But the aggressive, hate-filled campaigns against the women (like Trump's accusers) who come forward to tell stories about what they alleged happened tells a very different kind of tale about rape culture. When accused individuals try to "police" victims' stories and draw conclusions about why women do or do not report rape, why time passes before the survivors do report, or why survivors may at first deny that the violence occurred, that's going a step beyond trying to assert the alleged perpetrator's own innocence.

While the number of women who have accused Trump of sexual assault continues to grow, Kesha has been very much alone in her legal battle against Dr. Luke, and his aggressive attempts to discredit her seem a little heavy handed. But, not unlike Trump, he continues to not just assert his innocence but also systematically attempts to destroy the character of the woman who accused him.

A common psychological tactic used by abusers during and after the abuse is called "gaslighting", and it includes constant assertions of things like"That never happened," "You're lying," "You're making that up," and "You aren't remembering it right," in order to undermine the victim. Statements like these are common because two people will never have the exact same memory of an experience. But when used as a means to intimidate someone into back-peddling on a confession, they pose serious psychological harm. Famous, powerful men in particular may have said things like like "No one will ever believe you," or "I'm powerful and can do what I want and get away with it." In cases involving the rich and famous, these things may be implied: such in the case of Bill Cosby, who was a beloved performer before sexual assault allegations against him began to surface a few years ago, culminating with more than 50 women accusing him of drugging and/or sexually assaulting them. Cosby has denied all of the allegations and his rep did not respond to Romper's request for comment.

Rape victims often report that they are intimidated or even threatened by the perpetrator (or supporters) often while the abuse is still ongoing. For many, it can involve their own safety or the safety of their family. When you factor in the rich and powerful, it can also come down to financial control, which is part of what Kesha has alleged in her claims: that she was afraid to speak up about what happened because she knew he had the money and the power to make good on his threats. Depending on what statistics you look at, the number of rapes that are actually reported to police in the U.S. is anywhere from 15 to 35 percent, with the rate of reporting highest in cases where the rapist was a stranger.

The media continues to paint suspected and convicted rapists as "good people — except for the rape thing": Brock Turner's case, the case in Steubenville, and plenty of other incidents of college campus sexual assault initially painted the accused as "good students," "star athletes," and "nice kids," while pointing out any perceived flaw in the victim: saying she shouldn't have been drinking, she shouldn't have been at the party, she shouldn't have acted like she wanted to have sex.

The fact that a person has never done anything to you, specifically, doesn't negate the fact that they committed a violent sexual act against someone else. The truth is, people that you love can be rapists.Why do we try to highlight every possible positive attribute in the accused and assert that it's only the Law and Order "monsters types" who commit rapes?

Why do we vilify rape victims? The way a woman dresses, talks, acts, walks, thinks, works, plays, or otherwise lives her life never makes her "deserving" of rape. When we are content to continue to perpetuate the logic that rape is inevitable for a woman based on who she is, and that it's ultimately her responsibility to prevent it, instead of acknowledging that those who commit rapes are the ones responsible, we are doing a dangerous disservice to everyone. When society is more concerned with the possibility of false accusations than of letting a rapist go free, then no one is free from the risk of being a victim of sexual violence.

Kesha, as she pointed out in the New York Times profile, is still not free. Even if she's able to perform and record music, the psychological toll has been had (and will continue). The same could be said about the women who have come forward to make accusations against Trump or Cosby — only to then be publicly humiliated or have their personal information revealed on live television. In a culture that prioritizes the feelings and images of those who are accused rather than those who are asking for help, victim blaming and shaming — from accusers, court systems, and the public — will continue until we collectively put a stop to it.