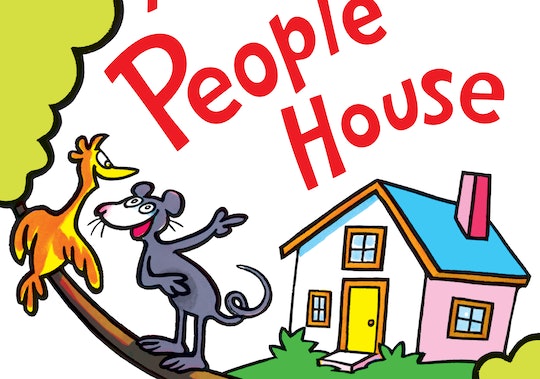 The Kid's Book That Makes Me Miss My Mom The Most, Now That I Have Kids

One of my most tender childhood memories takes place in the waiting room of a dental office, not your most traditional backdrop for nostalgia. But in this waiting room was a copy of In A People House, a Dr. Seuss “bright and early” picture book. It tells the story of a mouse taking a bird on a tour of a “people house,” identifying the myriad belongings one might find in a typical home, and making a mess along the way. It’s classically Seussian: simple words, bright illustrations, alliterative and rhyming. Creatures causing chaos.

I had my mother read it to me every time we were in that waiting room, seemingly very often. I was the tagalong with her and whomever of my four older siblings had an appointment. I’d perch in her lap and listen as the mouse showed off the things that make up a life. “Scissors, needle, button, thread. Cup and saucer. Pillow, bed.”

I loved the story, but mostly I just loved that time with my mom. She had five children spanning 16 years; her attention was a commodity. But in that waiting room there were no distractions of a house to be cleaned or dinner to be made, no competition with the needs and concerns of my brothers or sister. There was just me, her, In A People House.

This book is so revered, the first of my personal canon, that I always planned on it being the first I’d read to my child when I became a mother. My sister gifted me a copy of In A People House at my baby shower, for as much as I loved that book we had never owned it ourselves. In 2013 I had a son. The day we brought him home from the hospital I swaddled him in a baby blanket, settled in with him on the couch and read the opening lines. “‘Come inside, Mr. Bird,’ said the mouse. ‘I’ll show you what there is in a People House…’” My voice cracked. I couldn’t turn the page, dissolving, instead, into tears. An avid reader all my life, I had always imagined that first experience of sharing a book with my child as one of joy. Instead it was one of grief. With my newborn nestled in my arms and In A People House in my hands, I was bereft. My mom had died eight years earlier, five months after she’d been diagnosed with pancreatic cancer.

I miss her on my wedding day and on an idle Tuesday when I’m folding laundry. But I’ve never felt her death so profoundly as when I became a new mother, when I’m reading my son the book she always read to me.

The part of the story of In A People House that isn’t told, the picture you don’t see, is the perspective of the couple after they’ve returned to their home, the one that’s now overturned: the spilled food, the clothes pulled out of drawers, unraveled balls of yarn, toppled furniture. I imagine it would look like what my life felt like when my mother died: ransacked and rifled through. Everything out of place.

The thing about the major losses of our lives is that they aren’t singular events. My mom died when I was 20 but in the years since she’s died over and over again, in big and small ways. I miss her on my wedding day and on an idle Tuesday when I’m folding laundry. But I’ve never felt her death so profoundly as when I became a new mother, when I’m reading my son the book she always read to me.

The momentous occasion of having a child and all its accompanying anxieties is compounded by this grief. I won’t have my mother to teach me how to mother. I can’t call her and ask her opinion on a low-grade fever. I won’t dress him in clothes she’s picked out. I’ll never see his tiny hands in hers as she perches him on her knees to teach him how to clap. She won’t reassure me picky toddlers eventually will eat more than just jelly sandwiches. I am a motherless mother. She’s not here to show me around.

It’s made for a strange dichotomy: in some ways I’ve never felt her more removed from my life and in some ways I’ve come to feel more bound to her. Because I understand motherhood now, and in turn I can understand her in a way I never did when she was alive. I’ve read In A People House to my boys, of which I now have three, countless times. For a while it was in regular rotation before my oldest son’s nap, when he was 2-and-a-half. His favorite part was when the mouse is balancing a doll on a stack of plates and a teapot on his foot while standing atop a full garbage can. “Doll and dishes, teapot, trash. Look out below! I’m going to crash!” He would recite those lines aloud, laugh and look up at me with eyes that are strikingly like my mom’s, and I’d smile back. That’s motherhood: a precarious balancing; having it all together in one moment, having it all apart in the next. Carrying on.

'In A People House' by Dr. Seuss
Amazon

And so I take another page from In A People House. The objects my mom left behind command attention. They’re totems. Coffee cup, yellow patchwork quilt. Navy crew neck sweater, beaded purse. “This was your Nana’s,” I can say to my sons, summoning her. They can hold what she once held, things that declare her life. I read my sons the Little Golden Books of my youth, the ones in which she inscribed my name, tracing my finger across her immaculate handwriting where she declared me, her daughter.

My sons and I, we live in a people house. My youngest recently turned 1, so I spend a great deal of the day naming the world for him. I speak in nouns. But I hope to raise my boys to understand not everything you live with can be seen, that sometimes that which takes up space in your life can’t be named.