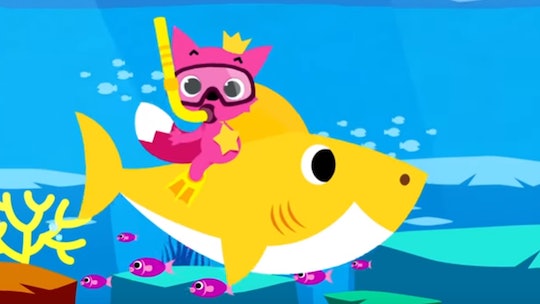 It used to be that drag queens were strictly associated with certain clubs or bars, as well as drag-specific pageants. This meant that children at practically zero interaction with gender nonconforming individuals. But things have definitely changed in this department. (And it's awesome, if you ask me.) Because these days, drag queen story hours with children at local libraries are becoming increasingly popular — allowing gender nonconforming individuals to have a more visible presence in today's society. Well recently, this drag queen performed "Baby Shark" per a toddler's request. And the result is pure joy.

Over the weekend, drag performer Marti Gould Cummings delighted a young audience member during a drag brunch held at a restaurant in New Jersey, NBC News reported. A video of Cummings dancing along to the popular kids' song — per a toddler boy's request — has racked up more than 608,000 views since it was shared on Twitter on March 16. And it isn't hard to see why. "When a 2-year-old comes to brunch you perform baby shark for them!!!" Cummings wrote alongside the now-viral video.

In the 22-second clip, Cummings claps and dances to "Baby Shark" as the 2-year-old claps along, clearly delighted with the performance. Take a look for yourself!

It's safe to say that Twitter is officially obsessed with this adorable moment. One person commented, "This is seriously my favorite video rn. We STAN a queen who’s not afraid to play to the kids. I bet those parents loved it. YAS. OMG."

Another Twitter user declared, "This just flooded me with joy."

Yet another person wrote, "Okay when I have kids I am calling you for their bday parties."

"So many people have responded to the video with so much love,” Cummings told NBC News. "Alexandria Ocasio-Cortez liked it on Instagram. Gus Kenworthy and Audra McDonald retweeted."

The internet can be such a toilet for negative, toxic behavior and misinformation, so it feels incredible to be part of this one moment that is using the internet to spread so much love and joy.

It seems that the response to the video really has overwhelmingly been positive. "I think any opportunity to spread some love and light into this crazy world is great," Cummings tells Romper. "The majority of the feedback has been positive and I think that is because people need something to smile about. The news cycle is filled with so much negativity that we need some more happiness and joy!"

This brunch event seems to be part of a larger trend of community activities involving drag performers. Drag queen story hours at local libraries, for example, have become increasingly popular in recent years. “Kids are drawn to shiny things colorful things," Miss Harmonica Sunbeam, who led a story time in Queens in May 2018, told PIX 11 New York. "Even if I don’t get their attention with the story, I get their attention with the outfit. I think it also creates conversion with kids and their parents even after story time is over." So true!

Still, some people aren't too thrilled about it. Like this armed man who tried to stop a drag queen story hour at a Texas library in February, according to the Independent. Or a naysayer who commented on Cummings' video, writing, "What the hell kind of a place for brunch is this that you would bring a child with women dressed like this?"

Cummings replied with, "A place that is welcoming to everyone. Where joy is spread and hate isn’t allowed through the doors." (Yasss!)

"I think people should focus on seeing other people as people and not judging," Cummings elaborates to Romper. "Drag is for everyone including kids."

I don't know about you, but I'd take my children to a drag queen story time or brunch in a heartbeat. One, because it just sounds like a great time. Two, because I think it's a good learning opportunity for kids to see that being a gender nonconforming individual is no big deal. That being yourself is perfectly fine — and more than enough. And last but not least, because who couldn't use more "Baby Shark" in their lives?