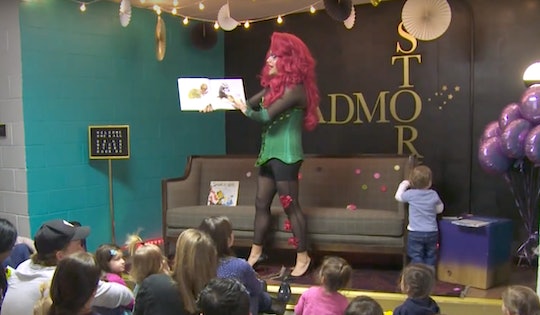 It's hard to teach your children about diversity using only words. Kids have both a profound and yet limited understanding of the world, and cognitively, they can only process so much at once. However, exposing them to different groups of people as young as possible is essential — it allows them to discover different genders, nationalities, cultures, and sexualities in an organic way. One way of accomplishing this is the Drag Queen Story Hour, an inclusive kid's event we didn't know we needed.

Drag Queen Story Hour is exactly what it sounds like: Drag Queens gather at a library, school, bookstore, or other location and read stories to children of all ages. The first DQSH took place in San Francisco in 2015, hosted by Michelle Tea and RADAR Productions. Since then, the event has traveled all over the globe with the objective of exposing children to gender fluidity. The event also aims to give kids "glamorous, positive, and unabashedly queer role models." According to the site, you can actually organize your own DQSH in your town, or search to find upcoming DQSHs hear you.

According to the organization's programming director, their intent is to welcome diversity into community spaces while exposing kids to different types of role models at a young age.

"DQSH now offers literary and creative programming for kids and teens of all ages led by drag queens, kings, and creatures all over the world," Jonathan Hamilt, global programming director of Drag Queen Story Hour, told Parents. "DQSH is a global network of local organizations — almost 50 and counting — each of which is independently managed and funded."

Hamilt continued to explain that the organization was founded on the principle that people of all ages should be "free to express ourselves, and that civic institutions like libraries, schools, and other community spaces should welcome the diversity that exists around us, even in the places where we least expect it." He added, "For us, children’s literature can be both a mirror and a window: Books often help us see our own experiences reflected back to us and can also offer opportunities for new perspectives and adventures."

The more these events become popular, the more Drag Queen Story Hours are popping up all over the world. Just one look at their calendar of events reveal several upcoming dates in New York, North Carolina, California, and even Japan. The site also reveals that there are DQSH chapters in states like Alabama, Ohio, Washington, and Texas, as well as countries like Sweden, Puerto Rico, and Germany.

Honestly, the growth of these events is a big sign that we're making some real progress when it comes to ensuring the generations to come are as accepting and inclusive as the world should be.

To start a Drag Queen Story Hour chapter or plan an upcoming event, you can head to DragQueenStoryHour.com to find all the information you need. Happy reading, queens!

More Like This
13 Is "Too Early" For Kids To Be On Social Media, Surgeon General Cautions
14 Recipes For Sick Kids When Everyone's Tired Of Canned Soup & Crackers
35 Children’s Books Starring Black Characters
The 10 Coolest Things NASA’s Webb Telescope Has Seen So Far
What Parents Are Talking About — Delivered Straight To Your Inbox