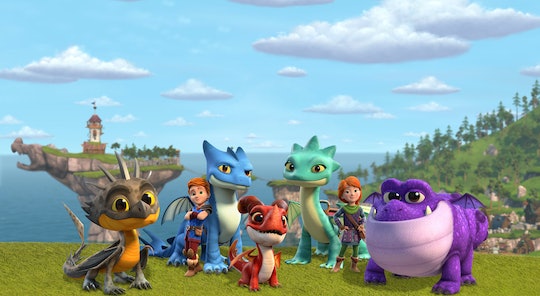 Get ready to take to the sky and soar with Dreamworks' new animated series, Dragons: Rescue Riders. With a Netflix premiere of Sept. 27, the show is centered in a Viking world where twins Dak and Leyla head out on thrilling adventures with their adorable dragon friends. In this exclusive clip, you'll get a sneak peek of the new kids' show, Dragons: Rescue Riders on Netflix, and see how this brave crew puts their skills together to complete a rescue mission.

The show is centered around Dak and Leyla, who live in a faraway corner of the dragon and Viking world in a town called Huttsgalor. The twins were rescued and raised by dragons, and have learned to speak their language. With their lovable dragon friends — Summer, Winger, Burple, and Cutter — they venture out to rescue, defend, and protect their homeland.

In the clip, the Rescue Riders head into a cave to rescue a friend stuck inside, but end up getting separated and stuck. Leyla, Burple, and Summer realize the ropes they’ve tied to themselves to find their way out have run short, and when they stop to figure out a plan, the water level in the cave begins to rise, posing a great risk to them all. In another part of the cave, Dak, Cutter, Winger, and their friend are also trying to find their way out, and when they come upon the rising water, Cutter’s fire runs out, leaving Winger with no choice but to try and let out the gentlest blast possible.

After Winger fires a stronger blast than he hoped, Leyla hears the sound on the other side of the cave. “Hey, did you guys hear that?” she says. “It sounded like Winger’s power blast.” She begins to call out to Dak, and eventually he hears his sister’s voice. When the group discovers there’s only a wall separating them, Burple uses his somersault power to break it down, and after a few attempts, the crew is finally reunited. With the help of Leyla’s ropes to guide them, the Rescue Riders find their way out of the cave, saving their friend and completing their rescue mission.

If the animations and characters in the show look familiar, it’s because the series is a spin-off of Dreamworks’ How to Train Your Dragon, reported Deadline, and it opens a whole new chapter for the franchise. The remarkable voice cast features Brennley Brown as Leyla, Nicolas Cantu as Dak, Zach Callison as Winger, Noah Bentley as Burple, Skai Jackson as Summer, Andre Robinson as Cutter, and black-ish star Marsai Martin as Aggro.

With its light-hearted tone, fun characters, and masterful animation, the series is perfect for kids and adults of all ages, and the fact that it’s available on Netflix is icing on the cake.

More Like This
'Wednesday' Creators Say They're "Talking Amongst Ourselves About Season 2
'Workin' Moms' Has An Official Release Date For Its Final Season
'Virgin River' Has Wrapped Filming Season 5 & OMG Is Charmaine Still Pregnant!?
Eric & Donna's Daughter Will Ruffle Red & Kitty's Feathers In 'That '90s Show'