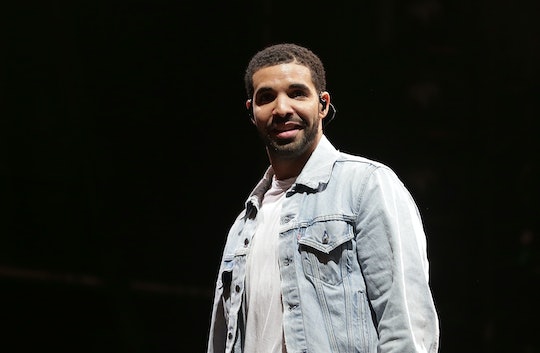 When Drake admitted that he is indeed, a dad, on his latest album, Scorpion, earlier this summer — people were a little surprised. Up until then, Drake had kept this major fact a secret. But now that his secret is out in the open, Drake is becoming more comfortable talking about it. Over the weekend, Drake opened up about fatherhood for the first time and his honesty about how hard it is is kind of refreshing.

During an appearance on LeBron James' new HBO show, The Shop, Drake stopped by to speak his mind about a lot of things, according to Entertainment Tonight — including fatherhood. As previously stated, it wasn't until this past June when Drake confirmed on Scorpion that he is a father to a son named Adonis, who was born in October 2017, according to Cosmopolitan. Adonis' mom is former French adult film star, Sophie Brussaux, according to Cosmopolitan, and as he rapped on Scorpion, he had barely even known her before finding out he fathered their kid. "...the kid is mine," Drake rapped on the song "Emotionless". "S—, we only met two times."

And now, four months after he rapped those lines (and around one year since his son was born), Drake opened up about what it's like to co-parent with someone who lives halfway across the world, according to E! News, and told James that his son is a "beautiful boy" with "crazy blue eyes" (OMG).

"I'm a single father learning to communicate with a woman, who, you know, we've had our moments," Drake said. "I do want to explain to my son what happened."

Drake continued, explaining that it's going to be a struggle to be a parent to his son, who lives with Brussaux. Drake said, according to E! News:

But I don't have any desire for him to like not love his mother or I don't want like, I don't ever want the world to be angry at his mother. Like, we have found ourselves in a situation and we are both equally responsible, and now, like, I'm just really excited to be a great father.

And Drake has the opportunity to do just that now that he has opened up about his situation and no longer has anything to hide. But, during the show, Drake admitted that it wasn't easy for him to come to terms with the fact that his son will be raised in a broken home. This was especially hard for him since Drake's parents divorced when he was five, according to Biography, and it has been something that he has rapped about in his songs before.

Drake mentioned this in the interview, stating, according to E! News:

I was really hard on my parents for giving me a sort of childhood that I had to wrap my mind around as I grew. I multiple times sort of suggested that they could have done a better job of whatever it was, co-parenting, sticking together, you know, not being so divided. As life shapes up and teaches you your own lessons, I end up in this situation where I don't have the fairytale...

But now that his secret is out in the open, Drake told James that he looks forward to his son getting a bit older so they can play basketball together. "You know he's already in the pool like shooting the basketball," Drake said. "He's gonna get to a certain age, I'm gonna bring him right to 'Bron's house and I'ma be like, 'Yo, summer camp at Bronny's house.'"

Talking about it in interviews like this one is the first step to sharing more about Adonis.